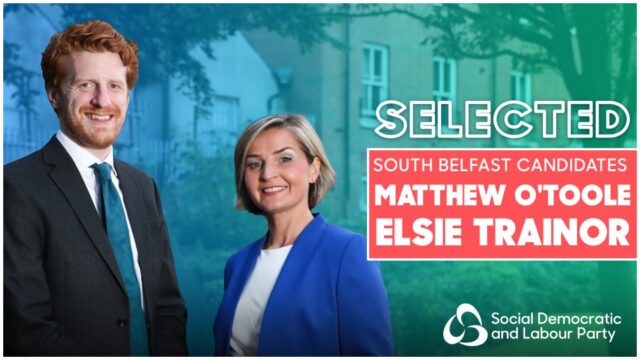 A Laois woman will bid to win a seat in the Northern Ireland Assembly elections next year after being selected by the SDLP to run for the party in the South Belfast constituency.

Elsie Trainor (nee McLoughlin) from Jamestown near Ballybrittas was announced at the party’s virtual convention this week as one of the party’s two candidates to run in next May’s election.

Ms Trainor lives in Belfast with her husband and three children and is a marketing and communications professional.

She is living in Belfast now for 20 years but grew up in the rural townsland of Jamestown, as the youngest of a family of 10, and attended Rath NS and secondary school in Portarlington before studying in UCD.

She will be on the SDLP ticket alongside sitting MLA Matthew O’Toole and bidding to win a seat in the five-seat constituency.

“She has an impressive record of community activism and will bring a huge amount of experience to the Assembly.”

“South Belfast has been my home for almost 20 years, it’s where I’ve built my career and where I’m raising my family,” she said.

“I’m not a politician but I’ve watched over the years as many of the people we trusted to represent our best interests have instead continued to put themselves and their parties first.”

“Inequality and poverty that plagues our still divided society, the horrific trends in violence against woman and girls, and a health service underfunded, underappreciated, and crippled my disgraceful waiting lists.

“There’s much more we can do if we choose a different path and a different set of people.”

As it stands the South Belfast constituency has five MLAs from five different parties – Sinn Féin, SDLP, Greens, DUP and the Alliance.

The SDLP’s sitting MLA in that area Matthew O’Toole was co-opted to fill the vacancy left following Clare Hanna’s election to Westminster in 2020.

Of the 90 seats across Northern Ireland, the SDLP have 12 MLAs (one of whom is former Laois football manager and All Ireland winner Justin McNulty from Armagh).

Sinn Fein have 28, the DUP have 27, the UUP 10, Alliance 8 and the Greens 2. People Before Profit have one seat as do the Traditional Unionist Voice (TUV).

Should Ms Trainor be elected to Stormont, she will add to the list of Rath National School past pupils in public office.

Elsie will work hard for South Belfast and all it’s communities. pic.twitter.com/jxviALENMm