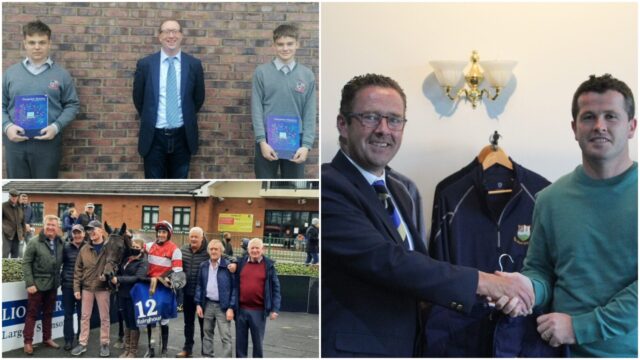 The introduction of a brand new subject at a Laois secondary school has been heralded as ‘an ideal step on the pathway to a very rewarding career’.

Computer Science has recently been introduced as a Leaving Certificate subject in Portlaoise College.

It is part of the school’s commitment to embed digital technology in teaching and learning.

2 – Mountrath farm sells for almost €1.2 million as Ballylinan land leased for €400 per acre per year

3 – Successful weekend for Laois trainer and syndicate in Fairyhouse

A Laois horse racing trainer enjoyed a very successful weekend at meetings in Fairyhouse and Limerick.

On Saturday, Liam Cusack’s Arrycan was victorious in Fairyhouse.

He went off at odds of 10/1 in the Adare Manor Opportunity Handicap Steeplechase.

A former Laois captain has been unveiled as part of the new management team for the senior footballers.

Chris Conway is part of Billy Sheehan’s new set up. The Arles-Kilcruise man will come on board as a selector/coach.

One of Laois’s greatest ever footballers has been confirmed as part of the new management team for the Laois seniors.

Laois GAA have announced that Brian ‘Beano’ McDonald has agreed to join Billy Sheehan’s team and will fill the role of coach/selector.

There were six arrests made for a range of offences following a checkpoint on the M7 on Tuesday.

Members from Portlaoise and Tullamore Garda stations, along with Customs and the RSA, conducted a multi agency checkpoint on the M7 at Derryvorrigan, Borris-in-Ossory.

Now in its 14th year, Blas na hEireann, The Irish Food Awards, is the biggest competition for quality Irish produce on the island of Ireland.

The draws for the Leinster club football and hurling draws were made recently.

After being postponed due to Covid-19 last year, the provincial championships return this year.

Two Laois U-15 club sides will have the opportunity to showcase their talents at Croke Park and Thurles.

The events will take place later this month as part of the competition’s 50th anniversary celebrations.

It was another busy week on the golf front with plenty of action taking place across the county.

We have results from Mountrath, Portarlington and The Heath below.