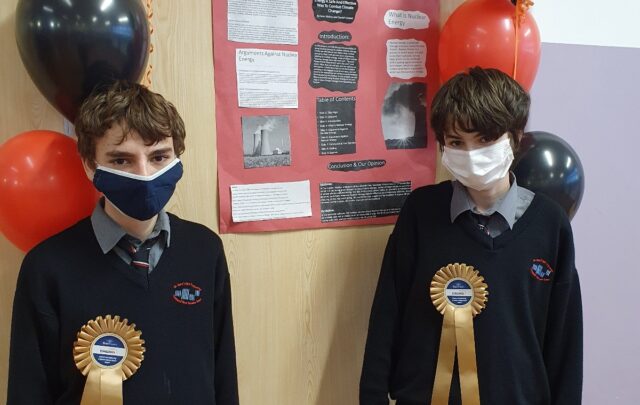 Portlaoise CBS students, Seán Maher and Daniel Corbet were successful in winning the accolade after presenting their project – ‘Is nuclear energy a safe and effective way to combat climate change’, at the school’s SciFest STEM Fair recently.

EirGrid, the operator and developer of Ireland’s electricity grid has partnered with SciFest to create the climate and energy focused award for its SciFest@School programme.

SciFest@School is a second-level programme promoting STEM (Science, Technology, Engineering, Maths) education by providing a forum for students to present and display their scientific investigations.

EirGrid is working to transform the power system for future generations and as such, wants to listen and learn from those who will be integral in Ireland’s efforts to achieve at least 70% of electricity consumption via renewable energy sources by 2030 – an important step on the journey to 80% and to net zero by 2050.

The EirGrid Climate and Delivering a Cleaner Energy Future Award was presented to Seán and Daniel for their project’s creative design and innovative approach.

Speaking about EirGrid’s involvement in the nationwide programme, Errol Close, Head of Strategy and Sustainability with EirGrid said: “EirGrid’s strategy is shaped by climate change and delivering a cleaner energy future.

“Achieving this will require strong development of the skills and critical thinking required across society.

“Our partnership with SciFest offers not only the opportunity to promote greater participation in STEM subjects, but also to support young people to develop these skills and showcase their innovation and creativity in addressing an existential challenge like climate change.”