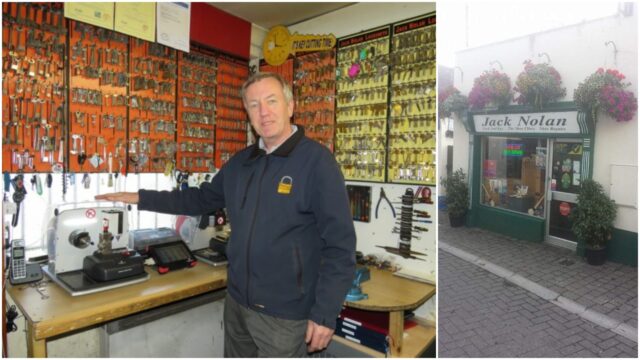 A well-known Laois businessman is celebrating 40 years of trading in the centre of Portlaoise.

Jack Nolan opened a shoe repair shop on Railway Street in Portlaoise on Holy Thursday in 1982.

He quickly established himself as a master cobbler and an expert in key cutting and locks to become the first Locksmith in the county as his business expanded and diversified.

When Jack started in Portlaoise there were three cobblers in the town, two in Mountmellick, two in Portarlington and one in Mountrath, Abbeyleix and Rathdowney.

But he is the only one still standing four decades later – with his ability to diversify the key to success.

After four years in business, Jack bought his current premises on Railway Street for £45,000, which was a considerable sum at the time.

The key and lock trade developed steadily for Jack from a time when it was just keys and two types of locks, Yale and Union.

Speaking previously to LaoisToday, Jack said: “Now you have digital access, fingerprint access – it is changing so rapidly.

“It is going to change even more rapidly. Now you can open your door by your phone.

“There has got to be trust. I would often be in a house but I wouldn’t have met the owner. The keys could be left for you and I would have the run of the house,” he said.

The decision not to get out of cobbling was something which stood to the Park-Ratheniska clubman, also.

“You have to diversify. If we depending solely on the locksmith trade after the Celtic Tiger crash then we would have been in trouble,” he said.

As well as the locksmith and key-cutting service, they continue a shoe-clinic and carry out repairs to shoes, boots, zips and leather goods.

Last month, Jack announced that he was stepping aside from his Midlands 103 role to begin cancer treatment in St James’ Hospital.

As Jack continues that battle, sons Darragh and Conor continue to drive on Nolan’s Locksmiths.