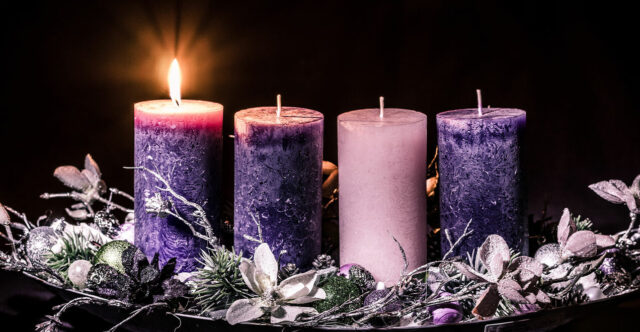 It should be no secret to anyone that we do not know the date of Christ’s birth, and so the Church baptised a Pagan feast.

They noticed that at different times, darkness seemed to be getting the better of the light. The sun, the light, was getting weaker.

It was obvious that those fearful dark days were getting stronger and longer and the people were afraid that someday the darkness would kill the sun and the light altogether, and they shuddered in fear.

But around the end of December, the people noticed that the tables had begun to turn. The sun was regaining its strength, and it began to push darkness off, and the light returned.

When the Christians came along, they took over this Pagan notion of the light defeating darkness. They chose December 25th to celebrate the birth of Christ.

So in the Christian scheme, within the great struggle between good and evil and light and darkness, this would be the time when the darkness of sin and death would now be overcome by the light of the world; Jesus, the son of God.

The Christians called this time Christmas, and they made Advent the beginning of the end of darkness, a time of looking forward to the coming of the light. And that is what it has meant ever since.

Advent marks that time when darkness begins to grow weaker, and the sun becomes stronger. Advent is an invitation to break through the darkness into the light.

It offers a challenge that comes to us very forcefully with a question: What darkness do you need to overcome? What darkness in your life and in your world would you like to see reversed? What breakthrough would you want for this New Year?

I suggest that if you are looking for an Advent motif in order to roll-back some of the darkness, it might be the motif of light-beaming.

We all contain within us the power to bring light: a gesture to make somebody feel better, a smile, picking up the telephone, an apology given, and a reach outward.

Very simple things, and yet with them we can heal hearts and souls, and often bodies. That could be our goal for the new church year, to be light bearers in the darkness.

There is a story of six people who froze to death around a campfire on a bitterly cold night. Each had a log of wood they might have contributed to the fire, but for reasons satisfactory to themselves, each person refused to give what they had.

Another would not give up his log because he recognised someone not of his race or religious faith. And the fire died, as each person withheld their piece of fuel for reasons justifiable to themselves, and so, they all died.

This story was originally told in a poem that ends with these tragic lines: six logs held fast in death’s still hand were proof of human sin; they did not die from cold without, they died from cold within.

In the prayer ‘Patient trust’ Pierre Teilhard de Chardin SJ reminds us of the tension between our desire to grasp time as if it is something to purchase and our desire to cooperate with the time of God as if it is a gift. He knows it takes courage to ‘let go and let God’ because it comes with frustration and uncertainty.

Teilhard wants us to trust that it is only God who knows how our life will pan out. To take the risk in following Jesus and to accept our unfinished state.

If the doorkeeper is attentive and patient throughout his shift, he will “keep awake” and be ready to greet his master when he comes. He will be a model of mindfulness that is awareness that arises from paying attention, on purpose, in the present moment and non-judgmentally.

Can we, like the doorkeeper, accept the frustration and uncertainty of being in waiting? Can we trust that God’s hand is leading us – letting our thoughts and feelings come and go in a mindful way?

Perhaps we can be in touch with the presence of Jesus while desiring an even closer relationship come Christmas day.

Above all, trust in the slow work of God.
We are quite naturally impatient in everything to reach the end without delay.
We should like to skip the intermediate stages.
We are impatient of being on the way to something unknown, something new.
And yet it is the law of all progress that it is made by passing through some stages of instability – and that it may take a very long time.
And so, I think it is with you; your ideas mature gradually – let them grow, let them shape themselves, without undue haste.
Don’t try to force them on, as though you could be today what time (that is to say, grace and circumstances acting on your own good will) will make of you tomorrow.
Only God could say what this new spirit gradually forming within you will be.
Give Our Lord the benefit of believing that his hand is leading you, and accept the anxiety of feeling yourself in suspense and incomplete.
– Pierre Teilhard de Chardin, SJ