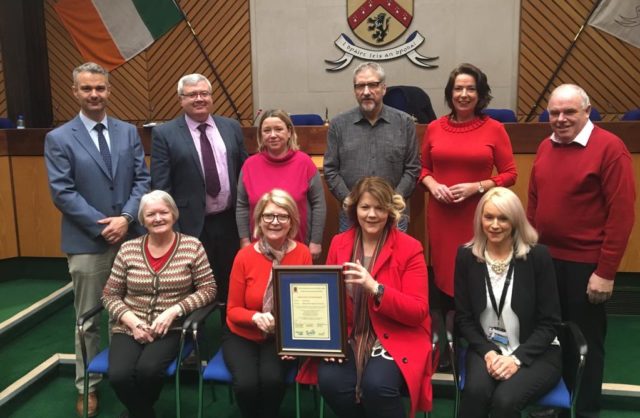 A Portlaoise store, which was given the honourable recognition of ‘National Gift Store of the Year’, was celebrated in the Laois County Council chamber yesterday, Wednesday December 12.

Nook & Cranny on Main Street, Portlaoise, received a Certificate of Achievement for the national honour during the monthly meeting of the Portlaoise Municipal District.

This was the first Certificate of Achievement Portlaoise Municipal district has ever handed out.

Director of Services Mr Kieran Kehoe praised owner Ladonna McCartan and her partner in both life and business Mark Healy on the incredible achievement.

“Winners of an All-Ireland competition. Nook & Cranny were up against huge chain stores and won.

“This puts Portlaoise up there as a place to come to. A phenomenal contribution has been made by Mark and Ladonna.

People come when there’s something worth offering,” said Mr Kehoe.

Nook & Cranny was also formally recognised as being one of Ireland’s Top 30 retail stores in the Retail Excellence AIBMS Awards 2018 in October.

Well done to Ladonna and Mark!