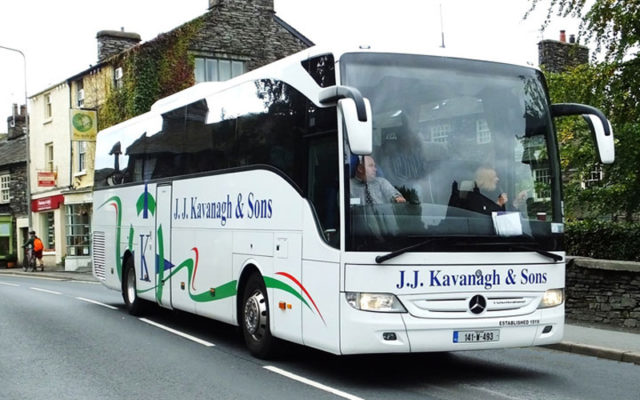 A huge blow has come to Borris-in-Ossory, Mountrath and Castletown commuters using the JJ Kavanagh Bus service from Dublin to Limerick, as it was revealed that the bus service will no longer stop and collect from these locations.

They will stop servicing Borris-in-Ossory, Castletown and Mountrath on Tuesday, April 16.

Speaking to LaoisToday, a spokesperson from JJ Kavanagh’s said duration of the route and feasibility are two of the reasons the three above stops will be removed from the Dublin-Limerick route.

JJ Kavanagh’s have said that it is not feasible to service these areas, due to the small numbers of passengers there.

They also said they will be putting official notice into the public domain.

Ireland’s largest private coach operator, JJ Kavanagh’s took over the service from Bus Eireann after the new motorway bypassing the towns was built.

These service provides transport for commuters on the Dublin-Limerick route, including a regular number of college students.

“This is another blow to rural areas and there has been no warning or consultation with the information to the customers coming from the bus drivers yesterday morning,” said local Laois County councillor James Kelly.

“The National Transport Authority needs to address this urgent matter straight away,” he concluded.

No alternative service has been announced as of yet, but local councillors have previously mentioned their wishes to see Laois Local Link services expanded, which are currently trailing a new successful nighttime route in some towns around the county.

The JJ Kavanaghs service will continue to operate to and from Portlaoise.