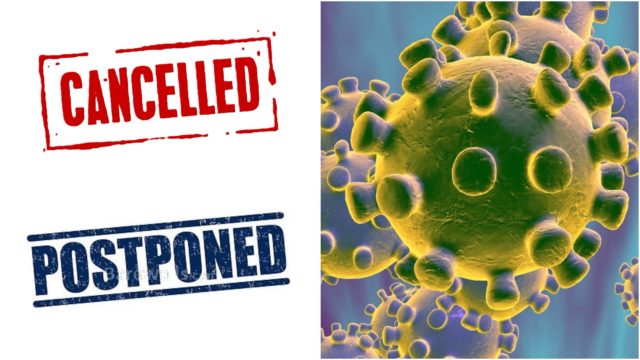 With colleges, schools and pre-schools set to close from tomorrow, Friday, March 13, until March 29 and restrictions placed on public gatherings due to the outbreak of Coronavirus, a long list of events locally.

The Government has banned public gatherings of over 100 people indoors and 500 people outdoors.

Here we list the local events, in alphabetical order, that have been cancelled, changed or postponed.

Basketball Ireland announced on Wednesday night that they were postponing all games and activity with immediate effect.

Local club Portlaoise Panthers followed up on that by also announcing that “all our training, academies, games and events are suspended until further notice”.

Christy Moore had been due to play two concerts in the Midlands Park Hotel next week on Thursday and Friday, March 19 and 20. He announced before the Government statement that he was pulling those two performances as well shows in Kilkenny and Killarney.

The following events have been postponed in the Dunamaise Arts Centre.

Michelle de Forge, Director of Dunamaise Arts Centre said: “We are trying our best to reschedule events where possible but all ticket holders to our March events are now entitled to a full refund, transfer to a new date or account credit for a future performance if preferred.

“Ticket holders will be contacted directly by the Box Office team in due course and we would ask them to please bear with us while we work through these calls and we thank them for their patience in doing so.”

“If you have any queries please don’t hesitate to contact us on 057 8663355 or see www.dunamaise.ie . Keep up to date with rescheduled dates and any further announcements on our Facebook and Twitter pages. We look forward to welcoming all our patrons back to Dunamaise in the near future and appreciate their patience, understanding and ongoing support.”

Killenard Bridge Club, who have members from Portarlington, Emo, Ballybrittas, Rath and Vicarstown have postponed all of their meetings until further notice.

The club meet every Monday night in the O’Dempsey’s GAA clubhouse.

The third level Ladies football competitions – the O’Connor Cup were due to be on in Tralee this weekend with a number of Laois players involved. But that has also been postponed.

A Laois County Council Civic Reception for the award-winning Portarlington Leisure Centre on Thursday night in county hall has been deferred to a later date.

The first of four monthly Laois GAA draws scheduled for Friday night will not be open to attend by club delegates as in previous years – though it will be attended by independent observers and streamed live on social media.

A number of Laois GAA games scheduled for this weekend have been postponed.

There was also a large schedule of almost 30 Laois GAA club games – in hurling and football at adult and juvenile level – that have now been postponed also.

All GAA activities, including training and team gatherings, have been suspended until Sunday, March 29 (inclusive).

Mountmellick Drama Festival Committee have announced the cancellation of the final two nights of this year’s festival.

Tonight’s production, Thursday, March 12, Eurydice and tomorrow night’s, The Cripple of Inishmaan will now not go ahead.

“We regret any inconvenience and disappointment this will cause,” they said in a statement.

An Operation Transformation Dog Walk organised by Petmania was due to be in Tullamore this weekend has been cancelled and announced on their Facebook page.

Portarlington Rugby Club have a tradition of going on an overseas trip in March – but their tour to Seville this year has been postponed. A large group was due to travel while the club’s U-11 and U-12 teams were due to go to Wales – that has also been postponed.

A number of students from Portlaoise CBS were due to go on school tour to Italy this week but that trip has also been cancelled with money to be refunded in full.

The 34th annual production of the Rathdowney Pantomime, due to start on Thursday, March 12 and run until Sunday, has been postponed also.
“Due to the recent announcement by Taoiseach Leo Varadkar this morning, the decision has been made at an urgent meeting by Rathdowney Panto committee and adult cast to postpone the panto until at least April pending further updates.

“We are thinking of cast, crew and the attending public in making this decision. Thank you all in advance for your co-operation and understanding. You can all be STARS ON STAGE in April all going well.”

Rosenallis GAA were due to have a fundraising Tractor Run this Sunday, March 15, but that has been postponed also.

All St Patrick’s Day parades in Laois have been cancelled, as well as the bigger parades in the likes of Dublin, Cork, Limerick and Galway.

The hugely popular annual Portlaoise Athletic Club ‘Streets of Portlaoise’ 5km run on St Patrick’s Day has also been postponed and will be rescheduled to a later date.

“All entrants will be contacted by popup races outlining the options in respect of the rescheduled date.”

The weekly Vicartsown parkrun on a Saturday and the junior parkrun on Sundays have both been cancelled until further notice.