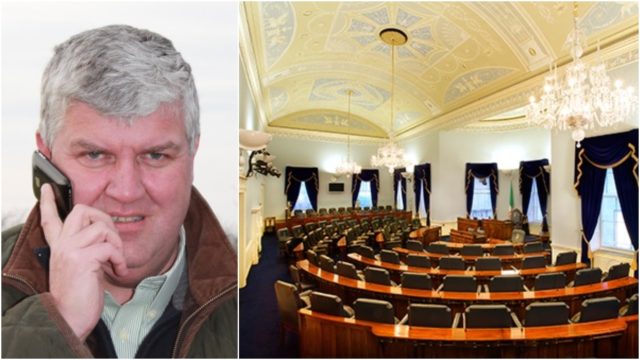 The Seanad Elections are like the under world of Irish politics.

Senators have a lower profile, it’s an incredibly complicated system and in ways the Seanad is viewed as a either a waiting room for the Dáil or a retirement home for some for some TDs who have lost their seats.

The fact that only politicians (for the most part) vote in the Seanad Elections mean it doesn’t capture the imagination like a General or Local Election.

But it still plays an important role in democracy in terms of passing legislation as the upper house of parliament.

Voting is coming to a conclusion around the country as county and city councillors, TDs and outgoing senators cast their vote for the five vocational panels – a total of 43 seats. The Taoiseach of the day (whoever that will be) can then choose 11 nominees with six seats available on the university panels and voted on by the graduates of Trinity College and the national universities of NUI Maynooth, NUI Galway, UCD and UCC.

Among the candidates for the agricultural panel is Dermot Cantillon, who owns Tinakill stud in Coolrain near Camross.

Tinakill, which was bought by Dermot and his wife Meta Osborne almost 20 years ago, extends over 200 acres where it is home to about 50 broodmares. They sell foals, yearlings and breeding stock at all the main Irish, UK and French sales. At the height of the season they could have up to ten workers on the farm.

Dermot is also the current chairman of Naas Racecourse and a former chairman of the Irish Thoroughbred Breeders Association, who put him forward for the Seanad elections as one of the qualified nominating bodies.

An independent candidate, it was a desire to be a voice for rural Ireland and the horse-breeding and horse-racing industry that made him put his name forward.

Steeped in the industry, he has had a long association with the Smurfit family’s Forenaghts Stud near Naas as well being a board member of Horse Racing Ireland. His wife Meta Osborne is a well-known vet and daughter of Michael Osborne, a former Managing Director of the Irish National Stud and the man who headed up the Sheikh Mohammed stud farm operations in Ireland.

Since entering the race for the Seanad, Dermot has criss-crossed the country meetings TDs and councillors canvassing support. He estimates that he clocked up about 10,000 km on his car before restrictions on travelling were put in place because of the Coronavirus outbreak.

“I was always an interested observer of politics but never a member of a political party,” he says. “But over the last year I started considering it. I’m originally from Tallow in West Waterford and I’m passionate about rural Ireland and the issues it faces as well as the issues facing the horse industry.”

The main political parties have a strong hold on the Seanad seats but he was encouraged by the success of a number of independents in the last Seanad elections in 2016.

“Some independent politicians make a big impact and contribution,” he adds. “You might not agree with their views and you don’t have to be in Government to raise awareness and be effective.

“There are some strong rural independents but I think we (the horse industry) have lost our voice. We get a lot of bad press and we don’t get our message across well enough.

“The industry is seen as an easy target and there are a lot of misconceptions out there. There were some loopholes but stud farmers are taxed the same as conventional farmers.

“It is seen as elitist but it is no different than any other industry. It is a great source of employment in Ireland and I’m very proud to be from the Irish horse industry. As an industry we have a great reputation across the world and we’re viewed as the All Blacks of the horse breeding game.”

Like the rest of the world, he is coming to terms with the Coronavirus outbreak. Next autumn he’ll be due to sell foals and yearlings at the various sales but he wonders what, if any, confidence there will be in the market.

And while he’s very proud of Naas Racecourse, where as chairman he played a key role in it helping it win Racecourse of the Year award in 2019.

The course, which has been getting an increased programme of higher quality racing in recent years and invested €1.7 million in its feature building The Circle in 2018, is currently closed as the Government attempts to limit the spread of the Coronavirus.

On the campaign trail he identified a key person in each county to help introduce him primarily to the independent councillors and says he thoroughly enjoyed the experience.

“It was only for three or four weeks and I said I’d give it everything I had. Win, lose or draw I definitely enjoyed it.

“It was a very positive experience. I met some very impressive people and some very dedicated men and women. The vast majority of county councillors go into it for the improvement they can make to their communities. They provide a great service to the people.

And he feels the Seanad is in need of reform too.

“It was a system brought in by Eamonn De Valera in 1937 and was a model based on Fascist Italy.

“It’s a very complex system. It was meant that the inside panel was for politicians to elect politicians and the outside panel (as a nominee of the Irish Thoroughbred Breeders Association, he is an outside candidate), it was to elect experts in their sector.

“But over time the politicians hi-jacked the outside nominations. And the criteria for getting a nomination for one of the vocational panels can be very tenuous.

“I have signed up for the petition for Seanad reform. I think the electorate and who can go for it is quite elitist. It needs to be more representative and inclusive.”

And though he acknowledges that he needs a “solid base of support from the independent voters”, he does feel he would make a big contribution were he to get to Leinster House.

“I feel as someone with an Ag Science degree from UCD and a Masters in Animal Science from University of Kentucky as well as a stud farmer, I am well qualified for it and could make a very positive contribution.”

Dermot Cantillon is one of 25 candidates seeking election to the 11-seat agricultural panel.

He is one six independents in the race for the agricultural panel including outgoing Senators Brian O Domhnaill from Donegal, Victor Boyhan from Dublin and Ian Marshall, a former president of the Ulster Farmers Union. Richard Mulcahy from Dublin and Patrick Kent from Wexford, a former chairman of the Irish Cattle and Sheep Farmers Association are also running.

Among the former TDs who lost their seats who are in contention are Fine Gael’s Pat Deering from Carolw and Fianna Fáil’s Eugene Murphy from Roscommon.

SEE ALSO – Explained: Who votes and how it works – five local candidates in the mix as nominations close for Senate elections