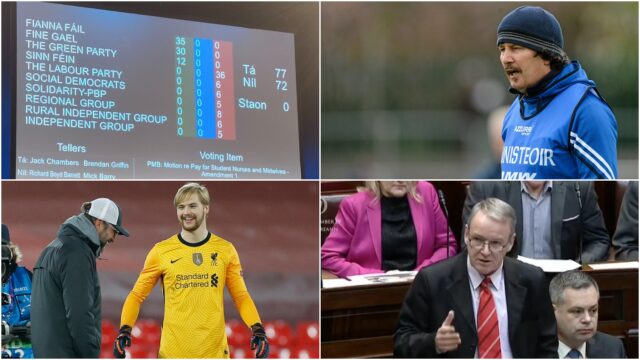 2020 has changed the word positive into being, well, a very negative one but as 2020 hurtles to an end (thankfully) it looks like some old school positively good news is on the horizon.

This week’s news that the UK have authorised the world’s first vaccine roll-out will be one of those moments that will feature in the 2020 Reeling in the Years episode.

Ireland, as part of the EU collective, is likely to follow in the coming weeks.

As a guest said to me on the radio recently, what we can look forward to in 2021 is drip drips of good news as opposed to the torrent of bad during 2020.

Incrementally over the next few months as we crawl slowly back to hopefully a newer, better version of normal we’ll have little good news milestones every other week along the way.

Perhaps it could be your local cafe reopening fully, the local cinema screening blockbusters again and folk being able to gather together for a well-earned pint in bars whether they be of the  wet or dry variety.

These are the little baby steps we can hopefully look forward to  in the early days of 2021.

Now if only the scientists could also create a real life memory stick ala the Men In Black movies so as to forget 2020 completely!

When a politician is making the news for a tweet it’s never for  something good, and so it was the case this week for  Laois/Offaly Sinn Fein TD Brian Stanley decided to tweet in apparent support  of  The Kilmichael Ambush and The Warrenpoint bombings.

Ambushes it should be remembered that claimed the lives of nearly 40 British soldiers, many of whom were young men  in their late teens or early 20s.

As a lover of Irish history I managed to visit the site of the Kilmichael Ambush during the summer (between lockdowns before you ask).

It had been on my historical bucket list visit for quite some time. For most the feeling you get there isn’t one of celebration, it’s one of acknowledgemt of darker days and the awful waste that wars and conflicts bring regardless of your support of the cause or not.

The same goes for Warrenpoint, one of the darkest days in our history.

There is nothing to celebrate here or anywhere lives were lost, there is a world of difference between commemoration and celebration, regardless of what side you fall on.

Mr Stanley has apologised unreservedly for the ill conceived tweet and as someone who hates cancel culture I hope that this is the end of it, not least because having a Laois TD as chair of the hugely influential public accounts committee is no bad thing.

But this latest political tweetgate couldn’t come at a worse time for Sinn Fein.

The party under the leadership of Mary Lou McDonald is surging in opinion polls.

Their key to electoral victory is convincing the non-traditional Sinn Fein voter that they, as a party, have evolved from the dark days of the troubles, that they are fit to lead a government  in this state.

Spearheaded by the very capable McDonald Sinn Fein’s front bench has undoubted ability and more and more is looking like a government in waiting.

But tweets like this drag the past back to the present and may well make those all important soft Sinn Fein voters possibly  reconsider where they place their no 1 come election time.

I think even the most ardent of non Liverpool fans (and I’m aware there are many) would be heartened by the performance of Corks Caoimhe Kelleher‏ between the sticks for the Reds during the week.

The Cork-born stopper was excellent on his Champions League debut and with Liverpool’s No. 1 Allison out for the weekend’s Premier League fixtures it could mean that we see a bit more of Kelleher over the coming weeks.

No matter who your Premier League side is, it’s great to see an Irish man playing at the very top level and if Kelleher‏ can put a string of games together at Anfield he could well be pushing for the No 1 jersey for the boys in green which can only be a plus!

Call The Nurse … and pay them

As we know the government pays a lot of money to spin doctors to help them get their message out and to avoid, as much as possible, political fumbles but sometimes you’ve just got to wonder how our governments can score so many own goals.

This week the three government parties voted down a motion brought by People Before Profit to reinstate pay for student nurses and midwives on placement.

If ever there was a time to recognise the work of medical students a global pandemic would be it!

Yes it’s part of their college course to get practical experience but given the dangers associated with being in medical surroundings this simple gesture, which would not break the bank, would  be a big win for a government that is starved of good news stories.

Even if it were to cover day to day expenses, some sort of pay for students on placements in hospitals and medical centres is the right thing to do.

You don’t need to be a brain surgeon to know that!

To be fair to the Laois GAA County Board they have wasted little time in filling the vacant chair at the top of Laois hurling.

As reported by LaoisToday, Cheddar Plunkett is set to return as hurling manager, a position he brought a lot of success to between 2012 and 2016

The appointment is a smart one. Cheddar has proven pedigree at the top level and has the respect of the hurling community which is a must for the position and hopefully this can put the negativity surrounding the departure of Eddie Brennan to rest.

Brennan for his part has taken up a coaching role with Dublin kingpins Cuala, an equally smart appointment by the Dublin side.

Next year in many ways is  a make or break one for Laois. This year was about consolidating their work in getting promotion and mixing with the elite’s of the games. The next step is to not just be competitive for most of the game but to start to get some wins on board at this level.

Hopefully Cheddar and his team can be the ones to do it.