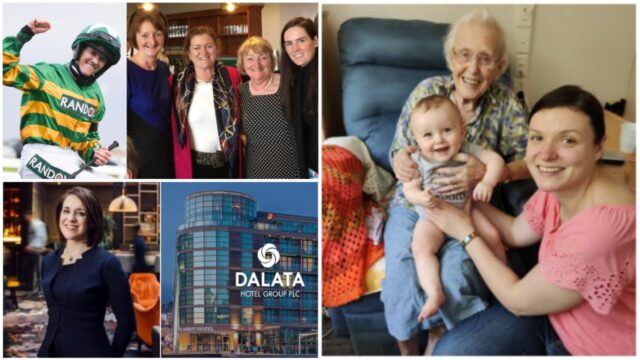 While Minella Times won the Aintree Grand National in the famed green and yellow colours of JP McManus, it was previously owned and trained by John Nallen, the owner of the Minella Hotel in Clonmel.

Nallen is married to Mountmellick native Bernadine Rochford, who is a GP based in Clonmel.

Bernadine has lived in Tipperary for a number of years but the Rochford family are well-known in community, farming and GAA circles in Laois.

There has been a pre-season blow for the Laois hurlers and Rathdowney-Errill as a key forward is set to be out for the 2021 season with injury.

Mark Kavanagh, who has struggled with knee injuries in the past, has unfortunately been struck down again.

There is deep sadness in Abbeyleix this week following the sad passing of Cathal Clooney.

Three Laois accommodations have been included in the Irish Independent’s 50 best places to stay in 2021.

Ballintubbert House near Stradbally, Glamping under the Stars near Ballyroan and The Heritage and Killenard were all included in the prestigious list compiled for Saturday’s print edition of the Irish Independent as well as their online version.

Portlaoise has become the latest town to be visited by a comedian who gives his own unique take on what life is like in different parts of the country.

It was a huge night for National Lottery players on Wednesday as a massive amount of prizes were given away.

One Laois players is a quarter of a million euro richer this morning after scooping the top prize in the Lotto Plus 2 draw.

€250,000 was won with a Quick Pick ticket purchased at the Corrib Oil service station in Fairgreen, Portlaoise on the day of the draw – Wednesday April 14.

Laois woman Carol Phelan has been appointed as the new Chief Financial Officer with the Dalata Hotel Group, the country’s largest hotel operator who have premises across Ireland and the UK.

The Dalata Group operate over 41 hotels under Maldron Hotel and Clayton Hotel brands throughout as well as managing a portfolio of Partner Hotels.

The Rathdowney native will take up the position from July 1 having been the group’s Head of Financial Reporting, Treasury and Tax since 2017.

8 – Laois Abroad: Meet the Stradbally woman who followed her heart and ended up in New Zealand

The seventh instalment of our Laois Abroad series for 2021 is here and a well-travelled Stradbally woman is up next.

Sinead O’Brien’s journey began back in 2014 when she departed Laois shores and headed for Canada with two friends.

It was there that she found love and returned to Ireland in 2016 with her partner Tomas Wilson who hails from Wexford – with the pair eventually heading to New Zealand.

9 – The importance of keeping alive our unique Irish words

If you said those words or phrases to someone a non-Irish English-speaking person the likelihood is that they would have no idea what you were on about.

But the author of The Little Book of Irishisms – Know the Irish through our words says it’s so important to pass these unique words and sayings on to the next generation or they could be lost forever.

Midland Steel in Mountmellick has been recognised for its innovation capabilities by cross-border body, InterTradeIreland.

The family-owned manufacturer which supplies offsite reinforced steel products to building projects in Ireland and the UK is one of only four business in Ireland to be awarded Exemplar status.