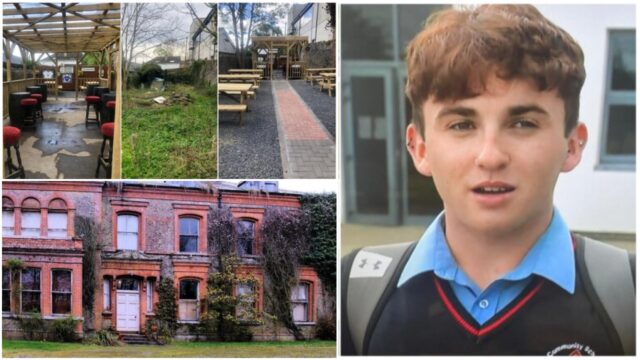 Being closed for a long spell of time has led to pubs and restaurants around the country using the opportunity to upgrade their facilities.

And one such establishment to make the most of lockdown is De Bruns @Humes in Portlaoise, owned by Liam ‘Stapo’ Brown.

The have completely overhauled an area at the back of the pub to accommodate a new beer garden that can comfortably seat 70 to 80 people.

Laois U-20 boss Eddie Kinsella has named his captain, vice-captain and 32-player panel for the upcoming Leinster championship campaign.

Portlaoise Damon Larkin is captain while he will be assisted by Portarlington’s Cathal Bennett.

A community group have opened a new volunteer-driven barista style coffee shop on the site of a popular tourist attraction.

Tigh Mochua Le Chéile opened their new establishment in the Timahoe Heritage Centre at the Round Tower on Bank Holiday Monday, June 7, from 10am.

The Tower and Bean Coffee Shop will be run entirely by volunteers and plans to be open on Saturdays and Sundays going forward.

On this week’s Property Watch we take a look at some of the homes currently for sale for €150,000 and under.

We look at homes in Portlaoise, Ballyroan and Ballylinan and in each case you can click through to see the full Daft.ie profile.

5 – Fancy owning your own mansion? Laois County Council have just acquired one and plan to sell it on

Anyone who fancies owning their own mansion will have the opportunity to purchase one in Laois shortly.

This is after the Council executed a Compulsory Purchase Order on a derelict mansion in Abbeyleix recently.

Originally a workers house in the late 1800s, Millbrook House is located on the Abbeyleix to Ballacolla road.

A man was arrested following a €120,000 suspected cocaine seizure in Laois.

The incident happened on Saturday June 5 at around 2.50pm.

Gardai stopped a vehicle in the Cappakeel area of the town and after a search, they discovered the drugs.

Laois GAA have confirmed that Enva Ireland will sponsor their development squads for the next three seasons.

The Portlaoise based company is a leading provider of recycling and resource recovery solutions – with locations across the United Kingdom and Ireland.

Laois U-20 hurling manager Ollie Hally has named a 33-strong panel, captain and vice-captain for the upcoming Leinster championship.

The Clough-Ballacolla man was originally named as a selector on this team but following the decision of Enda Lyons to step down in April, he took full control.

It remains the greatest day in Clonaslee hurling history.

In late October 1975, Clonaslee won the Laois SHC title for the first time in 65 years when they got the better of Clonad in the final in O’Moore Park.

The 2021 edition of the Leaving Cert got underway at schools across the country this week.

RTE despatched education correspondent Emma O’Kelly to Mountrath Community School to see how they were getting on.