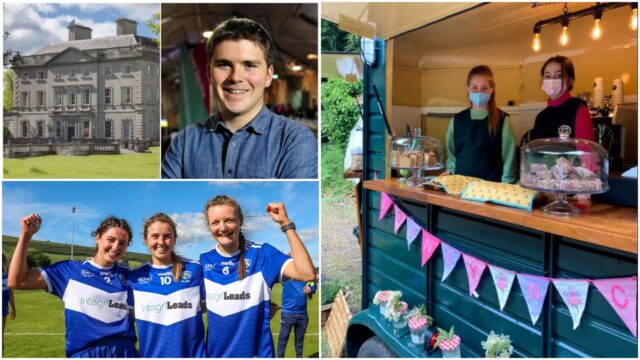 The new owner of a €20 million Laois mansion intends to live in the property and develop it for personal use.

A source close to John revealed to LaoisToday that Mr Collison, who is one half of international payments company Stripe alongside his brother Patrick, intends to live in Abbeyleix at different stages during the year.

Mo Nerney was the hero once again as her last gasp point proved crucial.

The Timahoe footballer kicked a point with 42 seconds to go that proved to be the difference following yet another incredible game of football.

The death has occurred of Portlaoise man Jim McCormack in South Africa.

Mr McCormack, who moved to South Africa with his wife Esther in 2017 to be close to his daughter Aisling, her husband Duane and their family, passed away on Sunday in South Africa.

Jim’s passing comes on the second anniversary of Aisling’s death who died suddenly in June 2019.

Conor Brown was Laois’s hero as he pulled off two saves and scored a penalty as Laois reached the Leinster minor quarter finals following a penalty shoot out win over Wexford.

Laois played for 10 minutes with 14 men and 20 with 13 men but managed to force extra time and then saw victory snatched from them there before coming back to win on penalties.

Togher Woods on the edge of Portlaoise town has been a much-visited local landmark for years – but even more so over the past 16 months during the various Coronavirus-related lockdowns.

And now a group of enterprising young local girls have tapped into the demand for good coffee – and maybe even cake – while we’re out for a walk.

L&Co Coffee Truck, which is operated by Inez, Mae and Orla Looney from Togher, are on site every day in Togher Woods from 10am-6pm serving a selection of  teas, coffees, cold drinks anda range of delicious homebakes. The girls are ably assisted by Niamh O’Sullivan and Molly Finlay.

Gardai are appealing for witnesses to an assault in a Laois town to come forward.

The incident occurred in Fr Breen Park in Abbeyleix on Sunday last at around 2pm.

This is the sports area that is shared by Abbeyleix GAA, soccer and tennis clubs.

The scoring touch of Kieran Delaney and the creativity of James Connolly was the difference on the evening in a very tight affair.

Delaney finished the game with 1-3 while Connolly set up a host of scores as Portlaoise had no answer to either of them.

8 – In Pictures: Smiles all around as Park-Ratheniska return to Intermediate football ranks following Junior success

There were great scenes at full time as Park-Ratheniska players and management celebrated with the 100 or so supporters.

Our photographer Paul Dargan was on hand to capture the celebrations at full time.

Mr Biato was there after staff and students in the school made a generous donation of around €1,300 to people in a city in Brazil.

The city in question is called Ituiutaba and the man who received the funds is called Tom McGrath – and he has a fascinating story to tell.

A call has been made for Laois County Council to investigate the possibility of erecting a car park in a Laois village.

Independent Cllr Ollie Clooney made the call in relation to Durrow at a recent meeting of the Borris-In-Ossory-Mountmellick Municipal District.

He put forward a motion asking the Council to investigate the feasibility of providing a car park in Durrow.