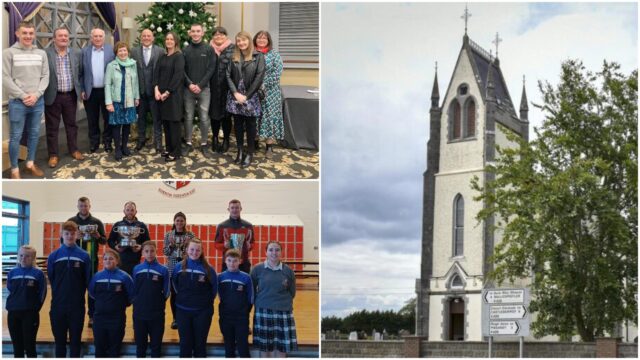 A ‘substantial amount of damage’ has been done to a Laois church following an overnight break-in.

St Abban’s Church in Killeen was the victim of the crime on the night of Tuesday December 7.

2 – PJ Kelly: ‘I sincerely am privileged and honoured’ to be new Laois GAA chairman

New Laois GAA chairman PJ Kelly says he is “sincerely … privileged and honoured” to be taking on the role.

Elected unopposed to the role at Monday night’s annual convention in the Midlands Park Hotel, he becomes the third Timahoe club man to hold the position, following in the footsteps of Sean Ramsbottom (1973-1987) and Dick Miller (2000-2007).

The Portlaoise man is coach with the east Galway side who won a fourth Galway final in a row – and a fifth in six years.

Portarlington are off to Croke Park following a two point win over St Loman’s in O’Moore Park last Sunday.

Colm Murphy led Martin Murphy’s charges from attack while Cathal Bennett was immense in defence as they set up a Leinster semi final clash against Kilmacud Crokes.

This was a brilliant game of football where Portarlington were pushed to the pin of their collar but showed just how good they are to win.

Four teachers at one Laois secondary school are set to end 2021 as GAA championship winners.

Portlaoise College are fortunate to have an extremely diverse and talented staff – and among them are four people who have excelled away from the classroom.

6 – Property Watch: Four homes currently on the market in Mountmellick

On this week’s Property Watch we look at four homes currently for sale in the Mountmellick area.

Among the properties featured are a Georgian home built in the 1800s that is on the market for €550,000, a traditional cottage, a renovated bungalow on a 0.5 acre site and 4-5 bedroom semi-detached home that has been completely refurbished.

Timahoe trainer Karol Ramsbottom enjoyed a superb treble at Shelbourne Park last weekend as the quickest greyhounds in the country were in action at the magnificent Dublin venue.

A Laois County Councillor has demanded that action be taken to carry out remedial works on a HSE owned building before ‘someone is seriously hurt’.

Independent Councillor Ben Brennan made the call in relation to Health Centre in Newtown which is now classed as a dangerous structure.

He asked for an update on what is happening with the building and explained the fears that people nearby have in relation to it.

A Laois man has been named the overall winner of the Teagasc Forest Photo Competition for 2021.

The ‘Celebrating Our Forests and Wood Use’ competition was won by Martin Maher for his photograph ‘Walking into autumn’ which highlights the beautiful Corrig Wood near Portarlington.

As winner of the ‘Celebrating Our Forest and Wood Use’ competition, Martin receives a voucher valued at €500 to add to his earlier category award of €300, bringing his overall prize value to €800.

Laois County Council has decided to operate free parking in three Laois towns for the next two Saturday’s.

In a bid to help support local business, free parking will apply in County Council controlled car parking areas on Saturday December 11 and 18.

This will happen in Portlaoise, Portarlington and Mountmellick.