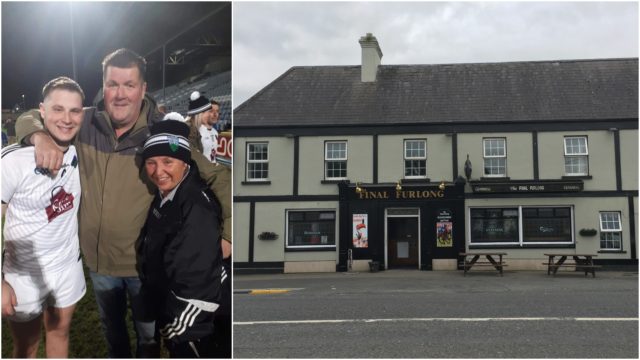 A local pub is a community as much as anything else – and that is certainly the case for the Final Furlong in Ballybrittas which celebrates 25 years under the current ownership of Alan and Trish O’Halloran this May.

Next Saturday, May 11, will mark the 25th anniversary of the husband-and-wife team taking over the business when they bought it from Alan’s father Christy in early 1994.

Under Christy, the pub was fondly referred to as ‘The Sargeants’, a nod to his Garda Síochána career. In 1994, however, after five years running the business, Christy sold it to his son Alan and Alan’s wife Trish.

Up to then they’d been living and working in America for the previous decade but along with their young son Mark, they returned to set up business and life in Ballybrittas.

A quarter of a century later they’re still at the centre of local life, immersed in the community and celebrating a significant milestone.

“We would like to take this opportunity to thank all our loyal customers and friends for the support we have had over the last 25 years,” said Alan this week.

“Without the support of the local people, our pub would not exist. We also want to thank all the various staff we’ve had over the years who have contributed hugely.”

Shortly after taking over in 1994, the O’Halloran’s had a pig-roast to mark the new ownership and the card players that had been coming to the premises for the previous 25 years settled in under the new owners and are still going.

A lot of the players have passed on but the cards are still played every Friday and Sunday night. Among the players are some of their older customers – Martin Scully, who recently turned 90, Jack O’Connell who is in his late 80s and Alan’s father Christy.

The pub is also strongly associated with sport, chiefly the local Courtwood GAA club. As well as being the club’s main sponsors for 22 years, Alan played with the club and was chairman for three years while both Alan and Trish served as a treasurer at various times.

Alan and Trish’s son Mark was on the Courtwood team that won the Laois intermediate football title last September – and has also played with Laois at all grades.

That intermediate football triumph marked scenes of great celebrations in the locality as they returned to the senior ranks for the first time in 24 years but the pub has welcomed many great sporting achievements over the years.

There was big celebrations when Laois won the Leinster football title in 2003, even more so given that goalkeeper Fergal Byron is from just down the road and his great season was recognised with an All Star.

As Ballybrittas is the first stop inside the Laois border, the village has been a stop-off for various Laois triumphes over the years.

Another local, Niall Donoher, also had a big year in 2003, winning an All Ireland minor medal and later going on to play with Laois for more than a decade at senior level prior to his retirement last year.

2001 also saw the Laois ladies football team famously win the All Ireland, with Tracey Lawlor, Aileen Aherne and Linda Jean Finn all representing the Courtwood ladies club at the time.

Another massive GAA link is well-known referee Eddie Kinsella, for whom Alan has been one of his umpires at big games all over the country – including the 2014 All Ireland final between Donegal and Kerry.

The great Shannon rugby team of the 1990s regularly stopped off in Ballybrittas on their way home from games in Dublin with Irish rugby internationals like Mick Galway, Alan Quinlan, John Hayes and the late Anthony Foley often enjoying a celebratory pint or two on the long trip back to Limerick.

The Final Furlong also sponsored Shannon over the years as a strong friendship developed.

While there is a bit of a joke in the pub in terms of the hierarchy of sport for the TV – with GAA ranked 1st, then rugby and then soccer – there are other strong sports connections too.

The Final Furlong Golf Society was a vibrant group for 14 years while the pub’s pool team are regulars on the local competitive scene too.

The relaxed atmosphere is underlined by the occasional appearance of the family pets – Tess, Hughie and Padge.

Over the years there have been many significant events. In 1999 they had Micheal O Muircheartaigh on hand to do the honours after the pub was refurbished; in 2014 they had a Wild West Night and later that same year hosted the celebrations as Courtwood won the Laois junior football title.

In 2017 they had the Maypole Music Festival and later that summer helped organise the B2B (Blackwater to Ballybrittas) Charity Cycle for the Irish Heart Foundation and Heart Children Ireland.

This year they are hosting the Fisherstown Tractor Run for the first time in ten years.

But this weekend they have huge plans in place to celebrate their own 25th anniversary. The festivities start on Friday night, May 10, with music by Jazz legend Max Zaska & Friends.

The Final Furlong hosts a music night every Tuesday (started by the renowned local Aidan Conroy along with Bill Carroll and JJ Fitzpatrick) and what began as a small gathering now attracts 18 musicians every week and a large audience.

Max Zaska – a friend of Fiach McHugh, one of the regular Tuesday musicians – recently launched his album in the Button Club in Dublin and not only was there over 1,000 people in attendance, among those there to support was his close pal Hosier. This will be his first appearance in the Final Furlong.

The music will get the weekend celebrations off to a lively start on Friday and there’s a host of activity planned for Saturday.

The Heineken Cup rugby final between Leinster and Saracens will be live on TV at 5pm, followed by music from local trad band The Pioneers and finger food. There will also be a raffle, with a signed Leinster rugby jersey among the prizes.

“We would like to welcome people to join the celebrations” – Alan, Trish and Mark. 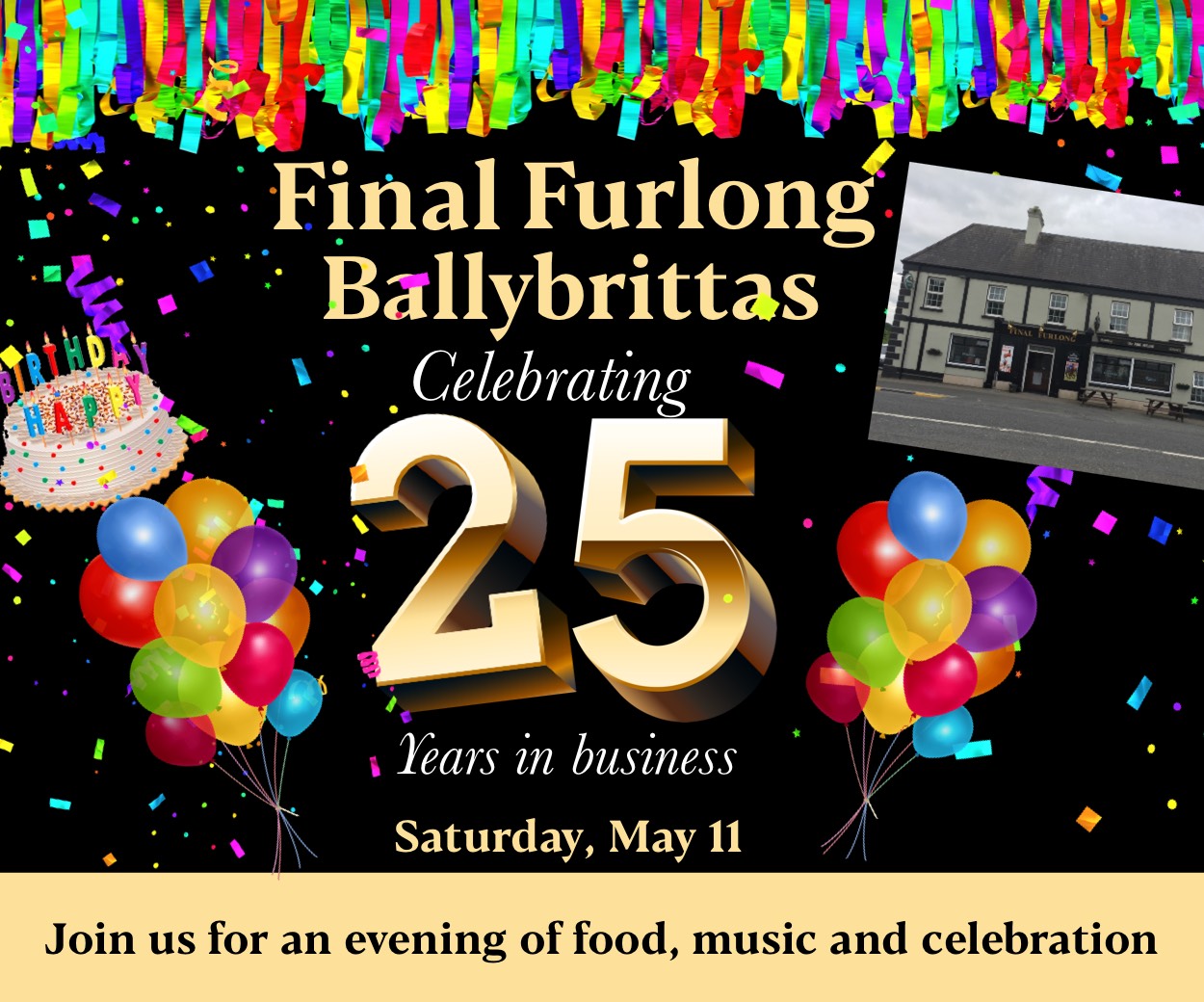