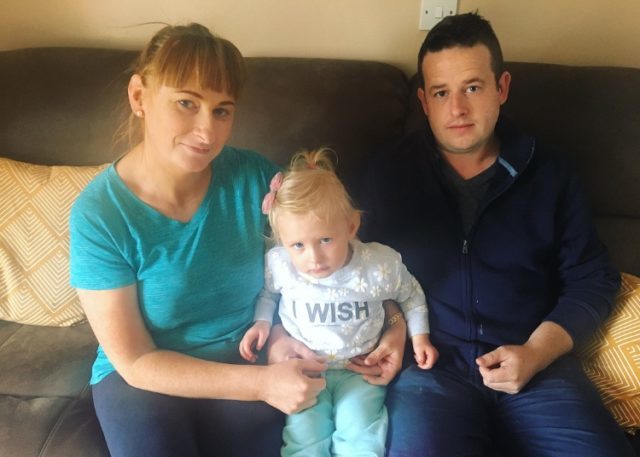 Just four days since Mary-Claire Knowles received life-saving treatment in Holland to help cut out seizures, her father Anthony has said that there is already a ‘massive difference’ in the three year old.

Dravet’s Syndrome is characterised by prolonged seizures, sometimes causing developmental delays and can cause an increased risk of sudden unexplained death in epilepsy.

In March of this year, Anthony said that he, his partner Rose, and little Mary-Claire can now travel every two months to get medicinal cannabis to help with her seizures in the Hague.

Speaking on Midlands 103, Anthony Knowles revealed that they travelled to Holland for the first time last week, and within four days of taking the new medication, they noticed a hugely positive change in Mary-Claire.

“We’ve noticed a big difference in Mary-Claire. Her speech, especially. Before Mary-Claire would blurt out a statement. Now she’s taking her time, choosing her words.

As parents, Anthony and Rose were understandably cautious about giving Mary-Claire the treatment, but said that it has all worked out for the better.

“We’ve been researching it for two years and travelling back and forth. Convincing ourselves first of all and convincing doctors over here.

Mary-Claire was weaned off her previous medications before beginning the medicinal cannabis and is starting on a low dose. This will build it up every two weeks to get her up to 1ml twice a day.

Anthony took the time to thank his blessings – between a life-changing Winning Streak appearance and to those who have fundraised for Mary-Claire’s medication, which cost €2,760 for the three-four months they will get out of this first dose.

Anthony said: “Only for the fundraising and Winning Streak it wouldn’t be an option for us. Only for we were blessed the way we were it wouldn’t have happened.”

When asked about how every day life is so far for Mary-Claire and the family, he said, ‘she doesn’t have much of a life’.

“It’s been tough yeah. We don’t get to go anywhere, we’re afraid to leave Portlaoise because anything can trigger a seizure. She doesn’t have much of a life. None of us do. She misses out on everything. The two boys at home do as well,” Anthony admitted.

However things are beginning to look up for Mary-Claire. Recently she celebrated her third birthday – her first birthday not in hospital.

Speaking on hospitals, Anthony told the Midlands radio station that Portlaoise hospital, ‘has done more for us than anybody’.

“Portlaoise hospital has done more for us than anybody. We’ve never had a problem with it. But regards the HSE it’s impossible trying to get anything done,” he said.

He spoke of his frustration that it has taken this long to get the treatment – and that they cannot save time and money by importing it – they have to travel to Holland every few months.

Anthony finished by saying that he will continue to press the HSE on the medicinal cannabis treatment for his daughter.