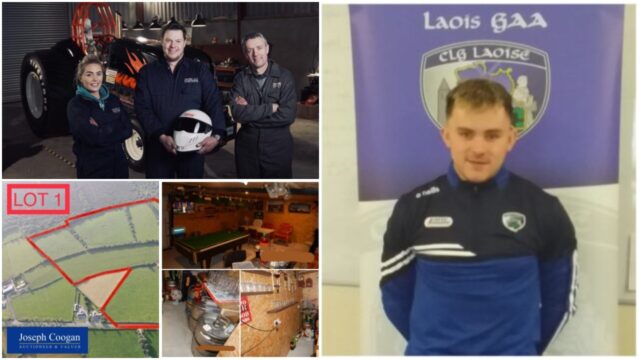 Gardai say they carried out a number of searches recently in relation to a number of ‘suspected Shebeens’.

One of the premises searched was in Laois, gardai have confirmed.

2 – Portlaoise farm sells for over €1.3 million at public auction

A Portlaoise farm has sold for over €1.3 million at public auction this afternoon.

The land is located at Clonboyne close to the M7 motorway on the Mountrath road and less than two miles from Portlaoise town centre.

Portlaoise Hospital was forced to close a ward to new admissions following a Covid-19 outbreak.

Management at the hospital confirmed to LaoisToday that a number of patients and staff have become infected.

An elderly Portlaoise couple endured an horrific ordeal in broad daylight last week as they got into their car after leaving the St Peter and Paul graveyard in the town.

A man in his 40s forced his way into the car, threatened the woman with a weapon and ordered them to drive.

However, the woman managed to get out of the car within a short distance of the graveyard which alerted passers-by to the situation.

Students in 5th year in St Mary’s CBS in Portlaoise were informed to stay at home for seven school days following a confirmed case of Coronavirus with one of the students.

“We have been notified today by the HSE that one of our 5th year students has tested positive for Covid-19,” said a message to parents this evening.

“We wish this student a speedy and full recovery.

Conor Shannon, from Lisdoonvarna in Clare, began his new role with the county last week.

Warm tributes have been paid to a Laois school nurse following her sad passing.

She is survived by her husband Mattie and children Aisling, Sinéad and Michael – as well as her brothers Gerard, John and Thomas.

There is sadness in Laois today following the news of the passing of a popular nun.

Sr Michael Roe, of the Presentation Sisters in Mountmellick, died on Sunday October 11.

Originally from Kilclonfert in Offaly, Sr Michael passed away in the tender care of the Sisters and staff of Shalom Nursing Home in Kilcock, Kildare.

A Laois man is set to star in a new three-part BBC TV series that is set to get underway on Monday October 26.

The Laois minor hurlers have named a 36-man panel for the upcoming Leinster hurling championship which gets underway this weekend.

They are set to take on Offaly in Birr on Saturday at 2pm in Round 1 of the competition.