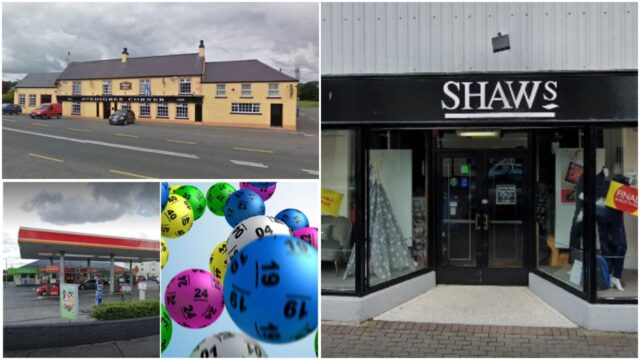 Shaws are to close to their Mountmellick store, one that has been a permanent fixture in the town for almost 160 years.

The news was confirmed this Monday that the shop in Mountmellick won’t re-open after the current lockdown restrictions are eased – but that staff there are being offered jobs in the Portlaoise store.

The Wandering Elk opened its doors on Friday for the first time – and was so popular that it sold out of bread by 2.30pm!

The venture is the brainchild of two Portlaoise GAA mates, Zach Tuohy and Murry Rogers who have been fermenting the idea of a speciality coffee house in their home town ever since they fell in love with the idea in Melbourne, which boldly boasts that it roasts and serves the best coffee in the world, no less.

3 – From the LaoisToday Archives: 22 unforgettable things about the night club at Pedigree Corner

The sign is still above the door but ‘Turning Point’ night club is no more.

A Laois man has claimed his quarter of a million euro prize following his recent Lotto win.

The man, who wishes to remain anonymous, scooped the top prize in the Lotto Plus 2 draw on April 14.

The €250,000 was won with a Quick Pick ticket purchased at the Corrib Oil service station in Fairgreen, Portlaoise on the day of the draw.

5 – First ever Technological University announced for the Midlands

Laois/Offaly Fine Gael TD, Charlie Flanagan, welcomed the establishment of a new Technological University in the Midlands earlier this week.

Minister for Further and Higher Education, Simon Harris, that Athlone Institute of Technology will be dissolved and a new TU will be established.

Speaking about the announcement, Deputy Flanagan said: “This is a great day for the Laois/Offaly and the Midlands area and this morning’s announcement will not only benefit students and staff but also businesses and communities.

“A large number of students across the Laois/Offaly constituency attend AIT and they will now be able to study in a university closer to their home. This will not only help address the regional imbalance but it will also  increase opportunities for students, enterprise and regional stakeholders.”

There have been many hard luck stories for Laois GAA players and teams over the years but few have experienced going from an incredible high to a low point as much as Chris Conway did in 2004.

Having missed the memorable 2003 season due to injury, he was the Laois captain in 2004 on the back of Arles-Kilcruise’s famous county final success the previous winter.

But disaster would strike for the forward once again before the most important game of the year.

Laois County Council has refused to grant planning permission for a new wind farm in the county.

Last Saturday marked the end of an era for the owners and staff of Breslin’s Pharmacy in Portlaoise as they served customers for the last time in their premises on the town’s Main Street.

When they re-opened on Tuesday after the Bank Holiday weekend, they had moved across town in a new unit in the Parkside Shopping Centre beside O’Moore Park.

Also moving to a new unit in Parkside is the Maryborough Family Practice GP surgery, often referred to locally as Dr Honan’s.

A major housing development is on the cards for a Laois village.

Plans have been submitted to Laois County Council to construct 99 new homes in Killenard.

Developer Matt Colgan wishes to bring the new development to the Tierhoger area which is near the existing Carriglea estate in the village.

The Mountmellick hurlers have appointed former Laois player James Young as manager for the 2021 season.

Young was in charge of his native Clonaslee last year but hasn’t returned to that position – with Mountmellick duly making a move for him to fill the vacancy left by Fergal Cuddy who was over them in 2020.

Young, who is by some distance the highest scoring Laois hurler of all time and was twice nominated for an All Star, guided Slieve Bloom to Junior ‘A’ success in 2016. He also had a spell over the Clodiagh Gaels club in Offaly.