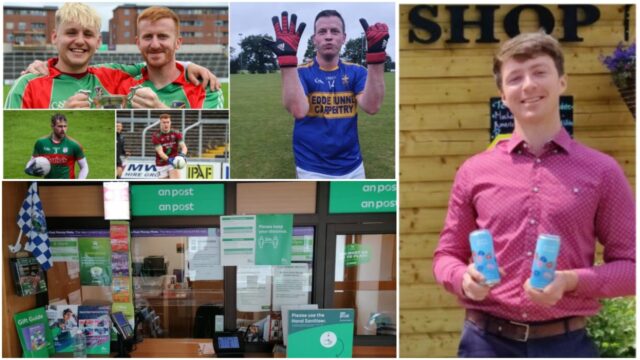 1 – Up and Coming: Meet the Ballinakill entrepreneur who has developed his own brand of water

This week on our Up and Coming series, we spoke to Ballinakill entrepreneur Edwyn Siney.

He is a driven 29-year-old who has developed his own brand of water – Brew Water.

Portarlington brothers Colm and David Murphy scored all bar four of their sides total between them as they saw off Ballyfin to reach their first Laois SFC final since 2001.

Martin Murphy’s charges got on top in the second quarter of the game and never looked back as they advanced to face Graiguecullen in Sunday’s decider.

A polished performance from Graiguecullen saw them qualify for the 2020 SFC final last weekend.

Kevin Doogue’s charges survived a first half wobble and showed great composure to see off Emo while playing against the wind in the second half.

Sean Downey, Charles Dwyer and Paul Simms, their laois hurling trio, were to the fore as they ran out four point winners.

The return of club matches in Laois means one thing – the return of the LaoisToday Teams of the Week.

The delayed 2020 Laois senior hurling and football finals will take place this weekend – and Laois GAA have made significant appointments in terms of the match officials.

Seamus Mulhare from The Heath will referee his first senior football final when he takes charge of the Portarlington v Graiguecullen game on Sunday.

While Padraig Dunne from Colt will oversee the hurling decider between Clough-Ballacolla and Borris-Kilcotton on Saturday night. It will also be a first senior final for Dunne.

Friday August 5 marked the end of an era in the village of Borris-In-Ossory as the present Post Office closed its doors for the last time.

In keeping with changes made countrywide by An Post, the Post Office will now move to its new location in the Daybreak store down the street.

On last week’s Property Watch, we took a look at some of the rural homes currently for sale around Laois for under €300,000.

The Managing Director of music promoter MCD said that he will ‘fight this week’ to have the decision to refuse a licence for Electric Picnic for 2021 overturned.

But we have had no update on this fight which may suggest that it didn’t go anywhere.

The death has taken place of Patsy Keating (nee Lynch), a well-known and liked Portlaoise woman.

Mrs Keating, who lived in Fieldbrook on the Dublin Road, was a popular staff member in Laois County Council for a number of years.