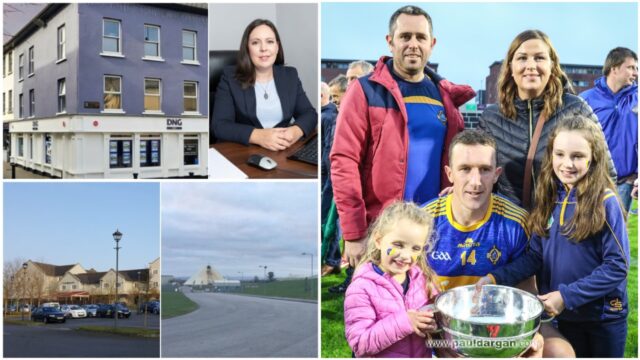 Portarlington were crowned Laois senior football champions for the first time since 2001 following a comfortable win over Graiguecullen in O’Moore Park last Sunday.

Martin Murphy’s charges were on top from the start and ran out comfortable winners in the end.

This final had been delayed by ten months due to the Covid-19 shutdown last year but Clough-Ballacolla don’t care now as they claimed their first title since 2015 after defeating Borris-Kilcotton by five points.

It was their ninth success in total and they were led to victory by captain Stephen ‘Picky’ Maher who fired over 13 points.

One of the great famines of Laois hurling came to an end after The Harps won the delayed 2020 Laois Premier IHC last Friday evening in O’Moore Park.

Gardaí in Athy are investigating a fatal road traffic collision, that occurred on the R417 in the townland of Kilberry near Athy last Friday evening at approximately 6.10p.m.

A male motorcyclist, mid 40s, was fatally injured when he collided with a vehicle on the busy road just a short distance over the Laois border.

He was removed from the scene by ambulance to Naas General Hospital in a serious condition.  He passed away a short time later.

5 – Brand new solicitors office opens in the centre of Portlaoise

A brand new solicitors office has opened across from the Courthouse in Portlaoise.

D’Arcy & Co. Solicitors, Kildare, have been in business in the heart of Kildare Town for in excess of 20 years.

Having noticed year-on-year that a greater proportion of their clients are now coming from the Portlaoise, Portarlington and surrounding areas, the Principal Solicitor Paul D’Arcy decided to expand the practice and offer legal services to the people of Laois.

At full time, photographer Paul Dargan was on hand to capture the best of the celebrations.

Clough-Ballacolla won their first Laois SHC title since 2015 as the excellence of Stephen Maher and Robbie Phelan fired them to glory in O’Moore Park last Saturday.

There were brilliant performances all over the field for the victors with Lee Cleere, Brian Corby and Jordan Walshe also shining.

As stated above, the celebrations were extra special as the win signalled the end of one of the longest famines in Laois club hurling.

Separately, an application has been made to develop an underground mine extension to the former Galmoy Zinc & Lead Mine.

This is located in Kyle on the Laois-Tipperary border and the application was submitted Shanoon Resources Limited.

A doctor has aired his concerns for people’s health as it has been revealed that more than 43,000 vehicles are passing through Abbeyleix each week.

Of these, 4,300 are heavy goods vehicles and it is believed that they travel through the town to avoid the toll on the M7/M8.