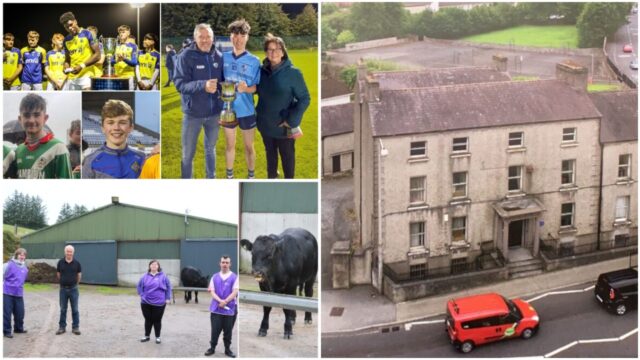 The sale of the old Parochial House and adjoining grounds in Portlaoise has been confirmed.

The property and land – located in the centre of Portlaoise – had been on the market for the past five years. The sale price hasn’t been disclosed nor the identity of the buyer.

A late Ronan Coffey free was the difference as Portarlington withstood a ferocious second half Portlaoise comeback to claim Division 1A glory on Tuesday night.

This was a much changed Portarlington side as seven of the team that started in the county final ten days ago were absent.

They were set to face 2020 Senior champions Clough-Ballacolla in O’Moore Park but the game will now not take place at that time and has been refixed for September 5.

The SHC is an exciting championship and we expect several new players to sparkle in the games.

Here we have picked out one young players to watch out for from eight clubs that are taking part this year.

Portarlington lead the way with nine selections while Graiguecullen have four with Emo and Ballyfin have one each.

This selection was updated following the semi finals and final.

A Laois basketball player is set to trade Portlaoise for Maine in the USA.

James Phelan, of Portlaoise Panthers, has secured a scholarship to Hyde School on the east coast of the country.

A kind-hearted Laois farmer is set to auction off a bullock in aid of a local community project.

Paul Ryan, a farmer living in Camross, is donating a bullock to be auctioned shortly in the Mart in Roscrea, in aid of Down Syndrome Ireland Laois Branch’s ‘Field of Dreams’.

The aim of this project is to build a centre of excellence, a training hub and an allotment area in Abbeyleix with hopes to eventually create independent living quarters at the property for people with intellectual disabilities.

John Strong’s charges had lost the 2020 SFC semi final to Graiguecullen at the same venue two weeks ago tonight – but they were much improved here.

After much deliberation, we have chosen an updated team following the final.

The Harps lead the way with eight, Portlaoise have three while Clonaslee, Colt-Shanahoe, Camross and Slieve Bloom have one each.

A recent Daft.ie study showed that rents in Laois have increased by 8% in the second quarter of this year – while it also noted that there were only 55 homes available to rent in the “midlands counties” on August 1.

And a search on Daft this week for homes to rent in Laois shows up just eight properties.

Here we take a look at some of what is available, ranging from €900 for a two-bed apartment in Mountmellick to €1,500 for an apartment in The Heritage in Killenard and a three-bed house in Clonagh outside Portlaoise.