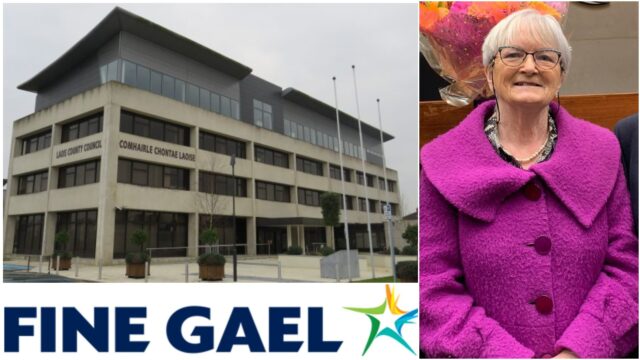 Fine Gael members in the Portlaoise Municipal District will decide at an online convention early next month who will fill the Laois County Council seat left vacant following the retirement of long-serving councillor Mary Sweeney.

Only paid-up members from the three branches in the area – Ballyroan, Abbeyleix and Portlaoise – will be entitled to vote at the convention on Wednesday, February 2.

Candidates must be nominated by one of the branches before January 31 and voting will be by postal ballot after convention with the successful candidate announced on February 24.

Should that be the case then the new councillor could be in place for the February meeting of Laois County Council on Monday, February 28.

When a councillor steps down from their elected role, the general understanding is that the immediate family have first refusal on the position.

But it’s believed that neither of Mary Sweeney’s children, Conor or Aoife – who have both worked in full-time roles with TDs and have been by their mother’s side through all of her election campaigns since she was first elected in 1997 – aren’t interested in taking on the seat.

In the event of a family member not taking on the position, then there can be a nomination and voting process among party members from the area in question.

There will be a hope among her supporters, however, that the seat will remain in the Ballyroan area which has long been a part of the Portlaoise district for local election purposes.

Indeed Ballyroan have a proud history of elected representatives with Charlie McDonald having served as a councillor, TD, MEP and Senator in a long political career.

As it stands, Fine Gael have two of the other six councillors in the Portlaoise district – Willie Aird and Thomasina Connell. They were elected alongside Mary Sweeney at the 2019 Local Elections.

This is the second local convention that Fine Gael have had to hold in Laois in less than a year.

In March of last year, PJ Kelly from Ballybrittas was co-opted to fill the seat previously held by Tom Mulhall.

On that occasion he saw off Vivienne Phelan from Stradbally in a postal vote following an online convention.