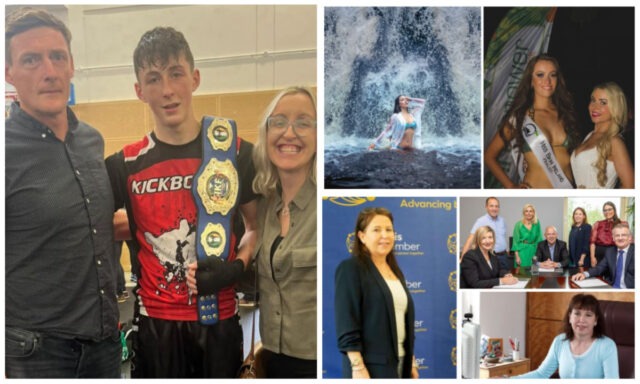 Laois GAA have announced that they have a brand new sponsor and that O’Moore Park is to have a new name.

Laois Hire are the new main sponsor of Laois GAA and our county ground will now be called Laois Hire O’Moore Park Stadium.

Former Portlaoise dual player Tommy Mulligan has been added to the Laois senior football backroom team for the 2023 season.

Mulligan, who was involved with the Portlaoise senior teams in a management and coaching role alongside Tommy Conroy and Malachy McNulty, will join Billy Sheehan’s backroom team alongside Chris Conway and Gerry McGill.

A Laois teenager was crowned an Irish Kickboxing national champion at a competition in the West of Ireland recently.

The 19-year-old who studies electronic engineering at Maynooth University, has taken part in a variety of sports over the years, including boxing.

At the final in the Twenty Two nightclub in Dublin’s city centre, Sinead who played football with Ballyroan, as well as taking part in athletics and boxing in Portlaoise, was required to walk on stage in a bikini and answer questions.

A design is currently being prepared to link two major roads in Portlaoise in an area where two abandoned houses are currently left.

The area in question is on the Stradbally Road out of Portlaoise and the two houses are located opposite the roundabout which heads up towards the cluster of primary schools.

Nineteen years ago, as minors, they had enjoyed big days in Croke Park in a season that ended with their own magical All Ireland final triumph.

That 2003 All Ireland minor success was a huge achievement, one that was probably overshadowed by the seniors Leinster success earlier that season and the minor glory years of 1995-1998.

But two decades on that group of players are still hugely relevant, making their presence felt in a hugely positive way both in a playing and coaching capacity.

Three-in-a-row Laois senior football champions Portarlington lead the way with 11 nominations for the LaoisToday Team of the Year.

The 11 nominations are a reflection of Port’s standing as the top team in the county at the minute – but is down on the 15 nominees that they received after the 2021 championship.

In all 14 clubs are represented among the 45 nominees with beaten finalists O’Dempsey’s next in line with eight, Portlaoise with six, Ballyroan-Abbey with four and Courtwood and Clonaslee-St Manman’s with three each.

8 – Yvonne McKeon Interview: Taking on the family business at 21, heading up Laois Chamber and the challenges facing businesses in the county

When the sudden death of her father saw her drop her plans to work in New York to instead run the family business – McKeon Stone in Stradbally – alongside her brother James, Yvonne McKeon was undaunted.

At just 21 years of age, having graduated in English and Philosophy from UCD, her plans were to work in journalism in New York.

Laois native, Cleo Knight, featured in this week’s episode of ‘OMG! What a Complete Education!’, a new podcast series, co-hosted by ‘Oh My God, What a Complete Aisling’ authors Emer McLysaght and Sarah Breen.

Park Ratheniska-Timahoe were crowned U-15 A1 champions after a thrilling encounter that went to extra-time against Mountrath in appalling weather conditions at the LOETB Centre of Excellence.