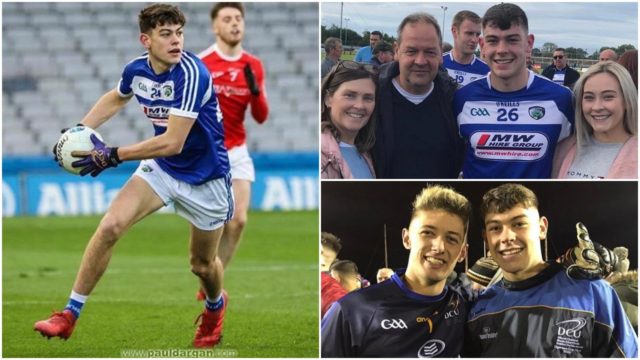 O’Dempsey’s and Laois footballer Mark Barry is the worthy recipient of ‘Sports Star of the Month’ for February.

Under normal circumstances, Mark would’ve received his award from Tommy Buggy of Property Partners Buggy in his premises last month but unfortunately Coronavirus got in the way.

And we hope that Mark will be able to receive his award from Tommy when social distancing and other restrictions are relaxed.

The 19-year-old DCU student enjoyed a simply remarkable month of sporting success back in February.

After being part of the DCU side that claimed Sigerson Cup glory at the end of January, Barry had a hectic February which saw him sparkle for two Laois teams.

With the seniors, Barry’s month began as he kicked seven points and top scored in an impressive Division 2 win against Armagh.

He was involved again two weeks later as Laois lost to Cavan before Barry’s attentions turned to the U-20s where he and his teammates played two games in the space.

The first game was the Leinster quarter final and it took place a mere 24 hours after that aforementioned Cavan game – on February 17.

Barry was introduced at the start of the second half and kicked three points to help Laois to a draw after extra time which resulted in the county’s first ever penalty shoot out.

The O’Dempsey’s man was one of the successful penalty shoot-out takers as Laois prevailed 4-3 to set up a semi final with Kildare.

That took place the following Friday and was played in horrific conditions with pouring rain and driving wind a prominent feature.

Barry once again top scored for Laois with four points as they won 1-7 to 0-4 to advance to the final against Dublin which took place in March and didn’t go their way.

But before the month of February was out, the O’Dempsey’s forward was back in action for the seniors against Clare where he appeared from the bench in one point win.

Check back tomorrow for a full interview with Mark.