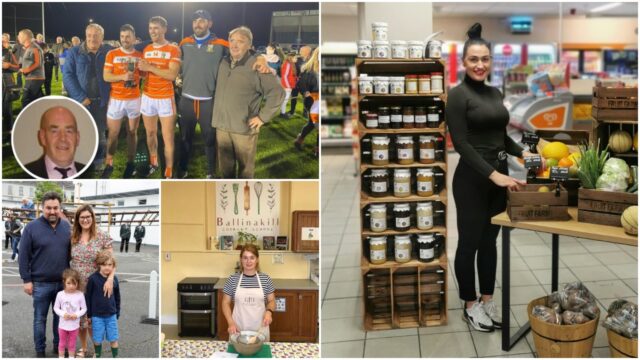 When Ela Oczachowska arrived in Ireland as a 19-year-old, she hadn’t a word of English but had all the qualities that employers love to see: a great attitude, hard-working, bright, ambitious and talented.

Fifteen years later and she is the proud new owner of the Your Stop shop in the square in Mountmellick.

While initially basing herself in Tullamore after she arrived in Ireland, where she started working in the Bridge House Hotel, she has made Laois home along with her husband Peter and their two children, Amelia and Nelly.

Planning permission has been submitted on behalf of Irish Rail to refurbish and reconstruct a derelict building at a Laois train station.

Sinn Fein Councillor Aidan Mullins has confirmed that an application has been submitted for works on Platform 2 in Portarlington Railway Station.

Mary was a Science and Biology in Portlaoise College and part of the middle management team in the school.

4 – Up and Coming: Meet the Laois mammy who turned her passion for cooking into a thriving business

This week, we spoke to a Ballinakill mammy who has turned her passion for food into a thriving business.

Ballinakill Cookery School is the brain child of Jean Bergin and was set up earlier this year.

A Laois teenager who sustained a serious injury in a soccer match last weekend was left stricken on the field as an ambulance failed to arrive.

Portlaoise AFC U-14s were facing Emo Celtic in Rossleighan last Saturday when one of the Portlaoise players sustained a serious arm injury.

6 – In Pictures: Emotional scenes as championship title dedicated to the late Tom Delaney

There were emotional scenes in the Centre of Excellence on Wednesday night as Slieve Bloom’s Junior B championship win was dedicated to one of their much loved sons.

Tom Delaney passed away suddenly at the age of 56 in July 2020 and this was a team he had managed, and even played on, for many years.

Clonaslee are through to Round 3 of the Laois SFC after they somehow managed to win a crazy game against Ballylinan on Thursday night.

Conor Gorman’s charges conspired to miss eight goal chances over the course of the evening but came from four points down in the final quarter to win.

Niall Corbet was their hero in the end as he kicked their final three points in a two point win.

A plane, last seen in public in Portlaoise over 100 years ago when it was one of the first planes in Ireland to take to the skies, returned home to Portlaoise on Sunday.

A huge gathering of well-wishers, heritage and aviation enthusiasts gathered in the spacious grounds of Laois Music Centre to view the newly restored Portlaoise Plane, to hear the story of its journey so far and to hear music composed in honour of Portlaoise’s other great aviation hero, Col. James Fitzmaurice.

In total, 11 clubs are represented this week – with Castletown leading the way with three.

Timahoe have sealed their place in the IFC quarter finals following a dramatic victory over The Rock in Annanough on Friday night.

This will be the first time in three years that the Timahoe men are not battling relegation and they did it thanks to a last gasp goal from veteran Brendan Quigley.

Sean Dempsey’s charges looked dead and buried as they trailed by two points with the game in injury time only for Quigley’s goal to save them and spark wild scenes of celebration at full time.