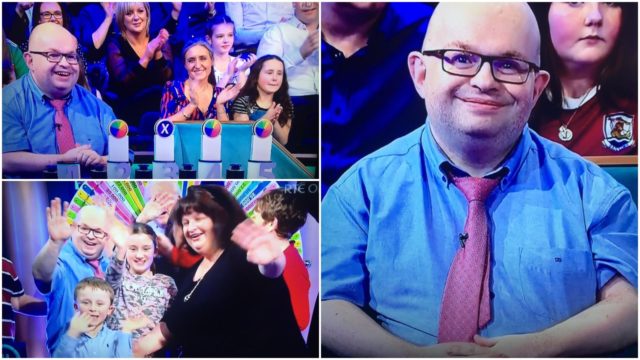 Ah, Winning Streak! Remember that TV game show that Laois people featured on routinely and won lots of money on before Covid brought it all to a halt?

Mountmellick native Brendan Lynch has won a whopping €53,000 on Winning Streak as he got to spin the wheel!

Brendan is a part time volunteer in the Citizens Advice Centre in Portlaoise and has mild cerebral palsy.

He told Marty Whelan and Sinead Kennedy how his lucky ticket was bought for him by his work mates.

Brendans family and work friends were all there to cheer him on.

In ‘Electric Dream’ Brendan chose the orange box but failed to win the €25,000 worth car.

In Wheel Reveal Brendan got all three wheels before any other contestant!

Brendan is just the latest in a string of Laois people to do very well on the show in recent times.

The most recent was Mary O’Neill from Portarlington.

Back in November, she was represented by her daughter Sandra Walsh who lives in Rathangan in Kildare and won €30,000.