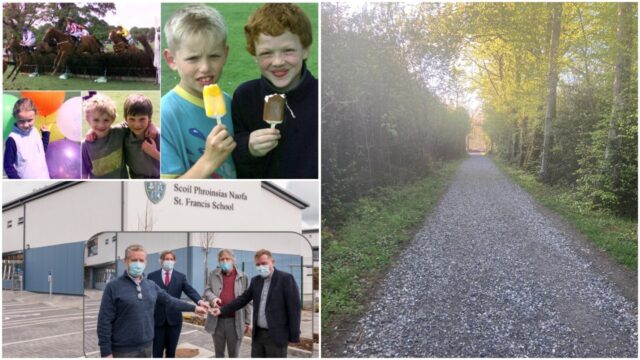 Alison Dyer from Portarlington has been crowned Miss Laois for 2021 in her bid to reach the grand final of the Miss Ireland competition.

The 23-year-old nurse beat off competition from two other Laois girls Sarah McDonnell and Halle Courtney as well as contestants from Westmeath and Kildare in the Wildcard 1 vote which has been running on the Miss Ireland app for the past number of weeks.

The Laois senior footballers made a dreadful start to Division 2 campaign as they were beaten by seven points by Clare.

Mike Quirke’s charges were never at the races and after Clare scored a first half goal, they never looked like getting back into the game – our Talking Points explain how the game went.

There was sadness in Shanahoe this week following the passing of a man who was heavily involved in their local GAA club.

Martin Breen passed away peacefully at his home on Monday in the loving care of his wife and family.

They say that great things are worth waiting for – and that is certainly the case for this Laois school.

Back in July 2017, almost four years ago, planning permission was granted for St Francis School to transfer from the Timahoe Road and build on the site of the old St Paul’s Primary School on the Borris Road, Portlaoise.

But now, that day has finally arrived.

5 – From the LaoisToday Archives: Some absolute classics in the Laois GAA club player nicknames

Laois GAA people are renowned nationally for their iconic nicknames.

From Cheddar to Picky to Wooly, the national media are often left ogling over our incredible ability to give people names that they weren’t christened with – and make them stick.

6 – #LoveLaois: Togher Woods – flat, scenic and just on the edge of Portlaoise

For the 20,000+ people living in Portlaoise, there was very few of them didn’t make their way out to Togher Woods at some stage during the various lockdowns over the past year.

Located just outside the town, it is managed by Coillte and provides a great local amenity with its walking route – and it was the feature of our new series last weekend.

The death has occurred of Carmel Murphy, the former proprietor of the Castle Arms Hotel in Durrow.

Mrs Murphy, who was in her 91st year, was a native of Wicklow but had been living in Durrow for a long number of years where the family have been involved with the busy Castle Arms establishment.

The hotel was opened in 1955 and has hosted all sorts of local events over the years as well as being a hugely popular stop-off point on the main Dublin-Cork road.

A Laois charity shop has announced it will close on Saturday May 29 following the passing of its manager.

Sheila Whelan from Doirefeá, Ballydavis, Portlaoise, and formerly of Monasterevin in Kildare, passed away in February of this year.

Mrs Whelan was a founding member of the Cuisle Fayre Charity Shop which is located on Church Avenue in Portlaoise.

9 – Moment in Time: Some quality photos from a Point to Point in Stradbally Hall in 2000

At some stage now in the not-too-distant future we’ll all be able to go to an event some day and enjoy it for what it’s worth.

Meeting friends, mingling and making the most of a good day out.

And one of the more under-rated local events is the regular Point to Points hosted in Stradbally Hall by Laois Hunt – which is where our Moment in Time features this week.

Gardai have been called to Glenbarrow Waterfall in the Slieve Bloom Mountains on several occasions recently where parking chaos has ensued – but a new car park is some way away yet.