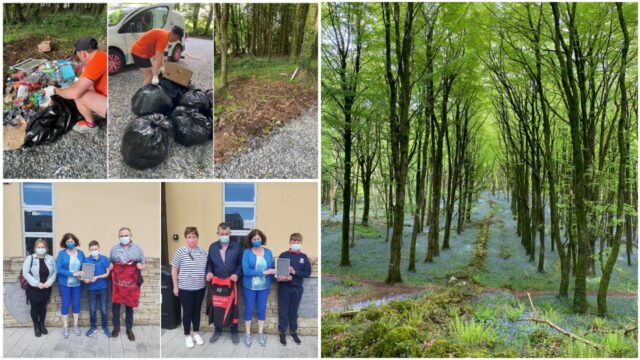 A world-leading travel guide book publisher has selected a Laois tourist attraction in its top 8 ‘incredible Irish locations’ to visit in 2021.

Lonely Planet has teamed up with Sony Mobile to reveal their choice of the top 8 unfrequented destinations across Ireland for 2021 travel inspiration.

And Laois’s Slieve Bloom Mountains has made the cut.

The residents of a private housing estate in Portarlington say they are disappointed that they were not consulted before it was agreed that an Approved Housing Body would take over the construction of 46 houses due to be built as part of the completion of the development.

They state that there is an over concentration of social houses already in the area, which includes the recently completed 22 Council houses on Ballymorris Road, along with the nearby Clanmalire, Cathair na gCapall and Derrymore estates and a group housing scheme for the traveller community.

While they are fully in favour of some social housing provision in the estate, they feel it should be in line with the Part 5 agreement where 10% of the units in an estate are designated for social housing.

3 – In Pictures: Local man springs into action to clean up disgusting dumping at Laois walking route

On Saturday morning last weekend, some person or persons came along a dumped a load of rubbish right at the entrance to Dysart Woods.

Portlaoise native Paul Ging who regularly runs in Dysart Woods came upon the disgusting dumping – and sprang into action.

We love hearing from people who have moved from a different country to live in Laois and this week in our ‘New to the Area’ series we hear from Stephanie Sparr, a native of Knoxville, Tennessee, who came to Ireland in May 2015 and now describes Portlaoise as her ‘Forever Home’.

Stephanie moved to Ireland after a chance meeting with her now husband on a holiday to Dublin.

Last year, it was in their final championship game and just like on that occasion, Donie Brennan’s charges came from behind to claim a valuable win.

And after defeats for the hurling, football and camogie so far, the ladies are the first Laois team of any description to record a win in 2021.

Two incoming first years have won the St Marys CBS “From each his best” scholarship awards for 2021/2022.

Gardai have been called to Glenbarrow Waterfall in the Slieve Bloom Mountains on several occasions recently where parking chaos has ensued.

The noise of heavy vehicles driving over manhole covers is causing a great disturbance to Laois people in two towns – leading one family to sell their home because they simply couldn’t sleep.

So a recent meeting of the Borris-in-Ossory/Mountmellick Municipal District heard from two County Councillors.

Fine Gael’s John King tabled a motion calling for the Council to ‘repair and make safe the manhole lids on the street at O’Sullivan’s house, Moore Street, Rathdowney and also in front of the Catholic Church area Rathdowney as these lids are hoping day and night and causing great disturbance to people who are trying to get a nights sleep’.

From Togher Woods, our journey of discovery of what Laois has to offer has taken us to Dysart Woods.

Directly opposite to the Rock of Dunamase, this wooded area has something for everything.

10 – ‘Asbestos sheets, furniture and building supplies’ found dumped in Laois bogs as school children, Tidy Towns and Coillte come together for clean up

200 bags full of rubbish which had been dumped in three Laois bogs has been recovered by school children, Tidy Towns group and Coillte at a big clean up recently.

Cllr John King raised the plight of three bogs in Errill at Friday’s meeting of the Borris-in-Ossory/Mountmellick Municipal District.

The Fine Gael Cllr explained how he had been alerted to the issue at the start of May. Asbestos sheets, furniture and building supplies were among the items strewn across the bog.