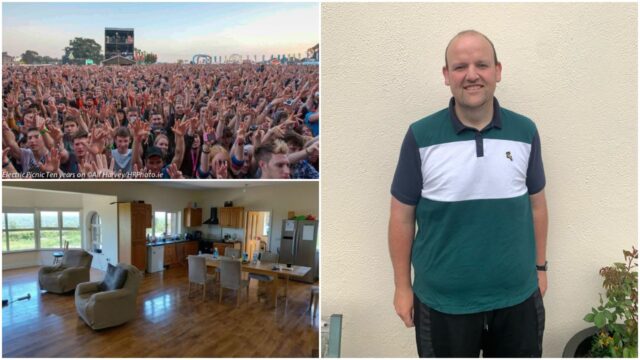 1 – In Pictures: 15-bedroom Laois house valued at €1.8 million goes on the market

A stunning 15-bedroom house valued at €1.8 million has gone on the market.

Coming equipped with eight bathrooms, this property located in Gurteen in Rosenallis was built in 2008.

It is located just over 1km away from the main entrance to Glenbarrow Waterfall and is surrounded by scenic views of the Slieve Bloom Mountains.

Farm land and houses near Ballacolla sold for a combined €615,000 at an online public auction on Friday afternoon last.

In what was an executor’s sale at Coolbally, Clough, Ballacolla, conducted by Hennessy Auctioneers, a total of over 30 acres, plus a four-bedroom bungalow, sold in four lots.

The vacant Centrepoint Shopping Centre on the Mountrath Road in Portlaoise is set to be demolished.

Laois County Council recently issued a derelict site notice to the owners of the site.

According to Director of Services Joe Delaney, Laois County Council believes that the owners will comply with this order.

We enjoy taking a regular look at houses for sale around Laois and this week we explore what is for sale at the top of the market.

Setting the bar at €750,000 we have come across homes in Killenard, Portlaoise, Abbeyleix and Ballybrittas.

5 – Electric Picnic updates as festival now set to go ahead

The organisers of Electric Picnic have released a statement following the news that this year’s festival is set to go ahead at a later date this year.

Festival Republic have explained their rationale for holding the festival three weeks later than originally planned.

But the news has not gone down well with Councillor Paschal McEvoy and Fine Gael’s Charlie Flanagan among those against it.

Young Laois rugby player Will Reilly has been called up to the Irish U-20s squad for the upcoming Six Nations campaign.

Reilly, who is from Ballyfin, was one of 38 players involved at the IRFU’s High Performance Centre in Dublin back in May.

He was not named on the original 34-man squad that was released last week but an injury to Ben Murphy saw Reilly get the nod – named on the bench for this first game which is this afternoon.

A Laois man is in the middle of a novel fundraiser in memory of his beloved dad and brother.

The community of Timahoe lost two of its most loved sons in a three month period at the end of 2020 and start of 2021.

John Dalton passed away on October 15 2020 and his dad Johnny died on January 3 this year.

Both were heavily involved in the community and also had a huge passion for GAA – and now son and brother David is aiming to honour them.

There was a tremendous atmosphere in St Francis School last week as the students and staff settled in to their brand new building.

On a phased basis, students and teachers familiarised themselves with their state of the art facility.

There was success for a Laois horse racing trainer and a Laois syndicate in Downpatrick last weekend.

Mountrath based Liam Cusack sprung something of a surprise in the Molson Coors Opportunity Beginners Steeplechase on Saturday last week.

His charge, Arrycan, was sent off at big odds of 22/1 and ended up galloping to a 12 length victory.

There was a bizarre situation in Laois County Council during the week as independent councillor Ben Brennan was elected as vice-chairman of the Graiguecullen-Portarlington Municipal District, despite an agreement between Fine Gael and Fianna Fáil to vote together.

Cllr Aisling Moran (Fine Gael), whose one-year term as chairperson of that district came to an end, was proposed for the vice-chair role – but she instead decided to propose Cllr Brennan for it in spite of an agreement between her party and Fianna Fáil that sees them share the key council positions.