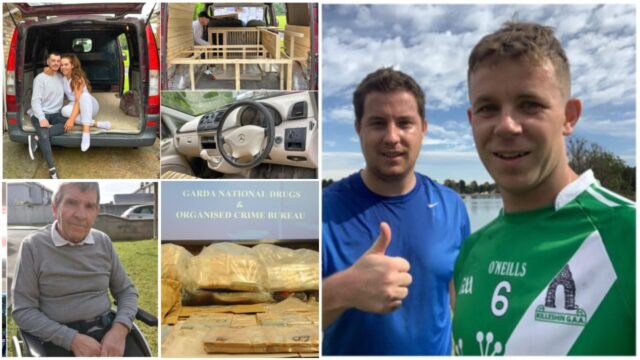 1- Crooked Compass: One Laois couple and their van conversion project

“Two eejits, one van.” And just in case the inverted comas didn’t alert you, those are not my words!

That, in fact, is the tag line on an Instagram account called Crooked Compass which is run by a young Portlaoise couple, Aaron Hyland and Ciara Dooley – and they have a fascinating story.

There is deep sadness in Mountmellick following the passing of Sean Dowling.

Mr Dowling, who had been battling terminal cancer since the beginning of 2018, passed away on Thursday morning.

Gardai made one arrest and seized €4 million in cash following searches at properties in Laois and Kerry.

It is being reported that this is the biggest seizure in the history of the state.

4 – What’s it like where you are? Four Laois people living abroad on their new Covid lifestyles

For people living abroad, it has been challenging too. Many are well settled, some who were travelling returned home, some kept going.

Six months after we checked in with a number of Laois people abroad in the early days of the pandemic, we catch up with some of them again to hear what it’s like where they’re living, have they considered moving home, what they miss the most from the pre-Covid world and what they find most difficult.

A Laois man, his sister in law and his friend, are to cycle, run and kayak to raise funds for the services who helped save his dad’s life earlier this year.

Four Laois lads are getting on their bikes on the opposite side of the world in aid of the Irish Motor Neurone Disease Association.

Former Laois senior football captain Stephen Attride, along with Graiguecullen twins Conor and James O’Regan and St Joseph’s Michael Byrne, are all set to embark on the remarkable feat next month.

The quartet will cycle 100k from Sydney to Wollongong on October 10 in aid of IMNDA. They have already raised almost €6,000 – less than a week after the fundraiser went live.

Laois County Council are hopeful that Portlaoise Leisure Centre will re-open in January 2021.

The board running the Leisure Centre decided in June to close the facility due to financial difficulties and the uncertainty caused by the Coronavirus pandemic.

This has come as a massive disappointment to many people who use this service.

Borris-Kilcotton avenged their 2019 Laois SHC final defeat to Rathdowney-Errill to seal their return to the final at O’Moore Park last Sunday.

In a thrilling game of hurling, the 2016 champions had two second half goals from PJ Scully and Stephen Dunphy to thank for guiding them back to the SHC final.