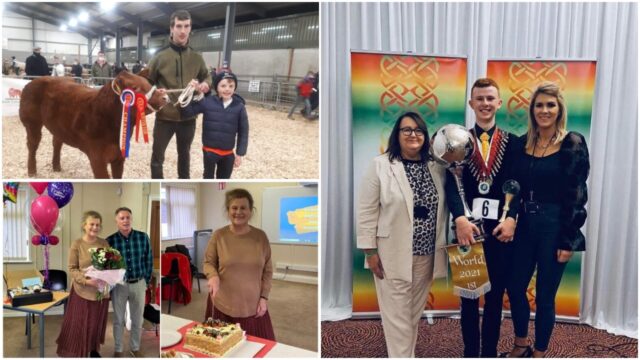 There was a deep sadness in Mountmellick following the tragic death of Daragh Lee last Saturday morning.

The 19-year-old was the pedestrian killed in a traffic accident on the N80 between Portlaoise and Mountmellick.

The Lee family are widely regarded in Mountmellick and Daragh was a past pupil of Mountmellick Community School.

A Laois man sold a Limousin heifer for a record €18,000 at the Carrick-on-Shannon sale in Leitrim during the week – having won the category at the prestigious Winter Fair show on Sunday.

Sean Ramsbottom from Timahoe sold the February-born 433kg Limousin heifer – crossed with a Belgian Blue – for what is being described by the organisers as a “new commercial record price” for a non-pedigree heifer.

3 – In Pictures: Tributes paid as Laois woman brings four decade career of helping others to an end

Doireann O’Connor from Ballyroan will be on the sixth episode of Last Singer Standing, which will air on RTE this Saturday evening.

After a lifetime spent serving her country, this Laois woman has continued in that sphere – but now does it a little closer to home.

Joan McCabe-Breen, originally from Swords in Dublin but now living in Portarlington with her husband Bryan and daughter, is the owner of Holistic Health Care.

But the 44-year-old’s journey to this point in her life is extremely interesting.

Fiona Stafford-Byrne from Castletown, who competes under the kennel name Danganroe, recently saw two of her dogs qualify for the prestigious event.

People are taking their life in their hands walking the footpaths when there are so many electric scooters about – so maybe parents should consider buying their children bicycles instead.

The matter was discussed at the recent meeting of the Laois Joint Policing Committee.

Sara Geraldine Rasool, of the Laois Public Participation Network, said that there were concerns about electric scooters in pedestrian areas.

Youths are leaving drug needles and beer cans in the hedges of Esker Hills, but residents of this Portlaoise estate are being threatened and intimidated if they confront the youths responsible.

At the recent meeting of the Laois Joint Policing Committee, Sara Geraldine Rasool, of the Laois Public Participation Network, said that there are concerns about drugs and weapons in Esker Hills.

PJ Kelly from the Timahoe club is set to be elected unopposed as the next chairman of Laois GAA.

Current vice-chairman Tom Clear from Clough-Ballacolla and Kieran Leavy from Portarlington had been nominated but both have withdrawn from the race, meaning Kelly will be elected without a contest at the Laois GAA convention on Monday, December 6.

10 – In Pictures: Huge success as Laois dancers excel at World Championships in Killarney

After a 20-month Covid-19 enforced shutdown, Irish dancers from Laois descended upon to INEC in Killarney where they excelled at the World Championships.

Almost 50 dancers from three Laois schools joined others from all over the world at the start of November.

Dancers from Lynam School, Buggie School of Irish Dancing and Burbage Irish Dance Academy took on competitors from America, Scotland, England, Europe and all over Ireland for a world title in the championships.