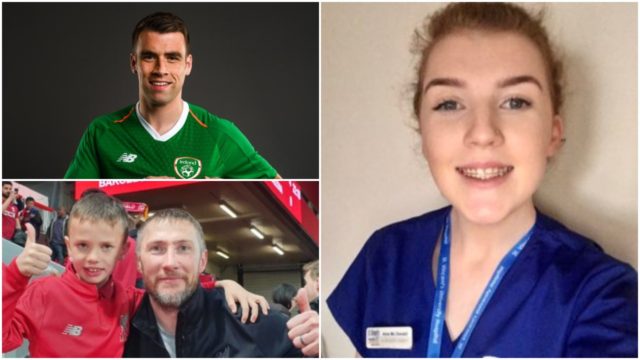 An ICU nurse working in Portlaoise Hospital has called on members of the public to start wearing homemade masks when they are outside in a bid to curb the spread of Coronavirus.

A Laois Garda has reminded businesses and people of their responsibility around physical and social distancing after an image of a large group of people queuing outside a takeaway in Portlaoise emerged tonight.

Gardaí arrested two women and seized a large sum of cash during an operation in Laois on Monday April 6.

Darragh Hiney has shaved his head in memory of his dad Owen who he lost to suicide in February.

Little Dan Donoher, the little man behind the ‘Do It For Dan’ fundraiser, has received €15,000 from Seamus Coleman.

Billy Sheehan, who soldiered in the blue and white of Laois alongside Dan’s father Niall from 2009 to 2015, will bleach his hair blonde on Easter Sunday alongside his son Timmy.

7 – On The Frontline: Laois nurse on what it is like working in a COVID-19 ward during Coronavirus pandemic

Having graduated with a BSc in General Nursing from University College Dublin in December 2019, Aine, who is a daughter and sister of the McDonald’s who reach the final of Ireland’s Fittest Family in 2018, has now found herself in the middle of the biggest public health crisis in a generation just four months into her nursing career.

8 – WATCH: Laois Community turns out in force to celebrate much loved granny on 100th birthday

All of her family, friends and neighbours got into their cars and proceeded to drive past her house in a motorcade with balloons, streamers and loud beeping of their horns.

Operation Fanacht will see a large number of checkpoints taking place across Laois and Offaly from now and over the bank holiday weekend in order to support travel restrictions put in place to help flatten the curve and save lives.

The seizures took place following searches in the Mountmellick and Portlaoise. Cannabis, herbal cannabis, cocaine, prescription tablets and a large amount of drug paraphernalia were recovered.