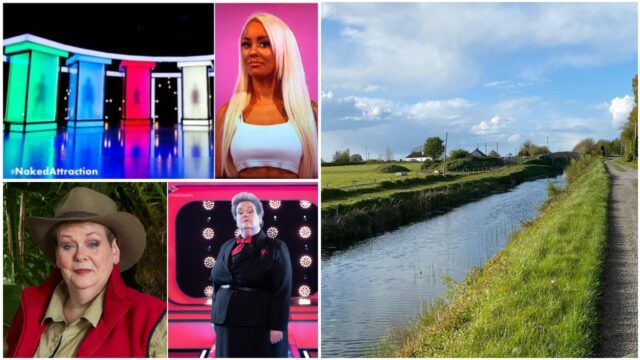 A Laois woman starred on the most recent episode of the new season of the hit Channel 4 dating show ‘Naked Attraction’.

The unconventional TV programme is hugely popular in the UK and Mountmellick native Amy featured in the latest episode of season 8.

The reason the show is so unusual is because it essentially takes the process of finding love and turns it on its head.

Anne Hegerty gave an insight into her family links with Laois during an episode of ‘Beat The Chasers’ on Virgin Media One recently.

‘The Governess’, as she’s known on the popular show The Chase, made the revelation when explaining the answer to a question on mythical creatures.

Going to matches in O’Moore Park won’t be the same for many people with the news of the sad death of Joe Dooley from Borris-in-Ossory.

Joe was a long-time steward at the grounds and for many years was the man on the gate that let players, officials and media into the ground.

He had a word for everyone and a good-humoured way about him that welcomed those he met on match days.

Laois senior hurling manager Cheddar Plunkett was not pleased about the rule which denied David Dooley the chance to make his debut last year.

Laois man Joe O’Donnell has been commended for doing a fantastic deed for Vicky Phelan by the woman herself.

Joe has been living in San Diego, California where he is the COO of Urban Plates.

He contacted Vicky to offer meals to the hard working staff helping Vicky while she undergoes treatment in the states.

6 – Second Laois GAA County Board draw held as over €31,000 in prize money given out once again

A total of 23 clubs had winners in the second monthly Laois GAA €130 county board ticket draw held last night.

Tom and Breda Kelly of Stradbally scooped the top prize of €10,000 while there were a total of 23 clubs represented among the 35 winners in all – with Ballyroan-Abbey having five winners.

This Sunday the Laois footballers will belatedly begin their 2021 season with a trip to Ennis to take on Clare in the opening round of the National Football League.

And we took a look at how the panel is shaping up ahead of the new season.

The first adult club games in Laois since last October will take place in just under a months time.

In correspondence sent to clubs last week, Laois GAA have finalised their structures for league and championship at adult level for the coming year.

Broadband – Unless you live in an urban part of Laois, it is definitely something that has caused you to throw out an expletive or two about.

Download and upload speeds across much of the county are extremely slow and when the pandemic struck last year and the majority of us were sent home to work and be educated – just how bad the problem really is was highlighted.

10 – #LoveLaois: Lovely Vicarstown – walking routes, bike hire and a Blueway route that is going to explode in popularity