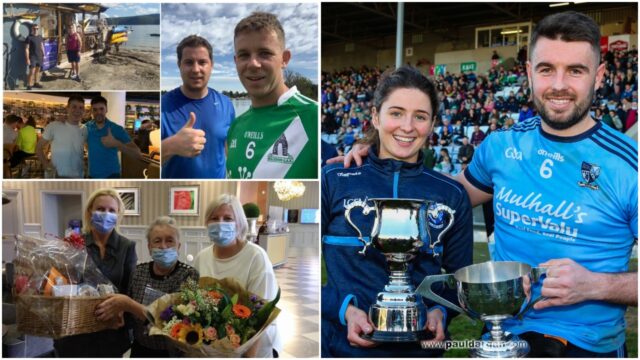 News of a stabbing incident in Portlaoise broke on Saturday morning last.

A man was the victim of a serious assault off main street in the early hours of the morning.

He is since recovering in hospital while Gardai continue to appeal for information.

Portarlington were crowned Laois Senior football champions for the second time in three months as they dismantled Portlaoise in O’Moore Park.

Martin Murphy’s charges built up a lead from the start of the game and were never in any danger of being caught.

In the end, they won by 15 points and it didn’t flatter them one bit. They will now go on to face either Garrycastle or St Loman’s of Westmeath in the Leinster quarter final at the start of next month.

There are three contenders for the vacant Laois GAA chairman’s position which will be voted on at next month’s annual convention.

Peter O’Neill’s decision to step down after four years in the role (he could have stayed on for another if he had wished) means there will be an election at convention a year sooner than had been expected.

4 – In Pictures: Glorious scenes as Portarlington celebrate once again

For the second time in 13 weeks, Keith Bracken lifted the Jack Delaney Cup. This time they had hundreds of supporters and family members to enjoy the experience with them.

And the photos captured by Paul Dargan afterwards give a sample of the joyous atmosphere.

Ballyroan-Abbey are Laois Junior ‘A’ football champions for the first time since 1998 following a dramatic extra time win over Barrowhouse in O’Moore Park.

There had been only one minute signalled but there was still time for one last attack and Ballyroan patiently held possession to set up Brennan – a half time sub – for his fourth point, and Ballyroan never looked back.

Four Laois lads are set to get on their bikes on the opposite side of the world once again in aid of the Irish Motor Neurone Disease Association.

Former Laois senior football captain Stephen Attride, along with Graiguecullen twins Conor and James O’Regan and St Joseph’s Michael Byrne, are all set to embark on the remarkable feat this weekend.

The quartet will join 18 others and embark on cycle 100k from Sydney to Wollongong in Australia on November 20 in aid of IMNDA.

7 – Portlaoise mam named Laois Carer of the Year for 2021

Portlaoise native Theresa Keyes has been named the Netwatch Laois Family Carer of the Year for 2021.

Theresa has two adult sons Mark and Peter who have special needs.

Peter lives at home with his mother while Mark is in residential care but still comes home for his holidays.

History was made in McCann Park in Portarlington on Sunday morning as Ballyroan defeated Graiguecullen to reach the Senior ranks for the first time in their 32-year existence.

Clodagh Dunne, Isabelle McWey and Andrea Moran were particularly dominant while Kate Whelan and Faye McEvoy were the stars of the show.

A fundraiser has been launched for a Laois mam in a bid to enable her to take part in a potentially life-saving clinical trial.

Roxy Phelan, a mother of two from Rathdowney, was first diagnosed in 2017 with stage 1B2 Cervical Cancer.

Wife to Jason and mam to Cathal (10) and Setanta (5), was treated with Cisplatin Chemotherapy, External Radiation and Brachy therapy.

It was a remarkable Sunday for one Laois family as two of them captained their teams to championship glory.

Clodagh and Ruairi Dunne led their sides to triumph within a couple of hours of each other.