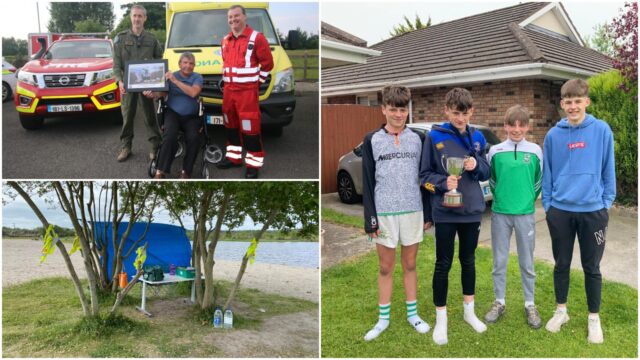 On full time in the 2020 intermediate hurling final, Rathdowney-Errill’s players celebrated with the 50 of so fans that were lucky enough to secure tickets.

Photographer Paul Dargan was there at full time to capture the best of the celebrations.

Portlaoise GAA club are no strangers to winning county football titles and they were again on the winning podium on Monday evening when they won the delayed 2020 U-13 ‘A’ football final by getting the better of Portarlington in the Centre of Excellence.

For one of their main players, however, it was an evening of mixed emotions.

Ben O’Connor badly injured his arm in an unfortunate fall, needing a trip to hospital where it was confirmed he had a broken wrist – but his teammates, including his brother, were on hand to cheer him up.

The infamous Arles bends will be familiar to anyone who has ever driven from Portlaoise to Carlow but there has been a considerable realignment project carried out over the past 18 months – and the official opening was on last week.

Due to Covid restrictions, these official County Council-related events (like road openings, sod-turnings etc) have become much lower key. But there was still some disquiet over who was and wasn’t invited.

At the recent Graiguecullen-Portarlington Municipal District meeting, Cllr Aisling Moran questioned the protocols in place that saw an invite extended to Deputy Sean Fleming invited but not to his fellow Laois TDs Charlie Flanagan and Brian Stanley.

Courtwood endured a miserable 2020 but the early signs for 2021 are good as they scored a five point win over O’Dempsey’s in the Old Pound last Sunday.

The winners did some good off season business with former manager Eddie Kinsella returning and Rob Tyrrell transferring in – and he gave an exhibition in the middle of the field.

The Camross native kicked a fine point and won kick-out after kick-out. Wing back Sean O’Flynn was equally as impressive too – running directly at O’Dempsey’s with great pace every time that he won possession.

Rathdowney-Errill were comprehensive winners of the 2020 edition of the intermediate hurling championship as they defeated a 14-man Trumera in O’Moore Park last Friday evening.

Teenager Paddy Hassett scored 1-7 while Ray Bowe added eight points from play – with the latter being named man of the match.

This game turned on a five minute period at the start of the second half where the winners scored two goals and the losers had a man sent off.

Planning permission has been granted by Laois County Council for a housing development in Abbeyleix while another has been sought in Portarlington.

Two blocks of five terraced houses are set to be built in Knocknamoe, Abbeyleix by Aston Homes.

The site is behind the Grallow Wood estate and near to the restored Abbeyleix Bog amenity.

7 – #LoveLaois: Derryounce Lakes – a budding tourist destination that is proving the perfect spot for school tours

For this week’s #LoveLaois, we made a trip out to Derryounce Lakes which is located just outside of Portarlington.

While technically the lakes are actually located in Offaly, an increasing amount of Laois people are using them as a public amenity.

A Laois man, his sister in law and his friend cycled, ran and kayaked to raise €7,000 for the services who helped save his dad’s life earlier last year.

9 – In Pictures: Wild celebrations as Camross players and supporters celebrate 2020 junior ‘B’ success

A clinical performance from Camross saw them claim the 2020 Laois JHC ‘B’ title over Portlaoise on Sunday afternoon last.

After racing into an eight point lead after just ten minutes played, the final outcome of this was never in much doubt, as Portlaoise just couldn’t live with a lively Camross side.

Cillian Tiernan, Niall Bennett and Dan Delaney lead the charge for the winners, who were full value for the victory.

10 – Up and Coming: Ballyroan Artist Clodagh Dunne on her stunning artwork

Our new series ‘Up and Coming’ is designed to highlight the great entrepreneurial spirit and creativity we’ve seen from Laois people this year.

This week, we spoke to Ballyroan artist Clodagh Dunne, who is going from strength to strength with her beautiful artwork of local people, places and things.

Clodagh is poised for a very busy week as she is also set to line out for Laois in the Ladies National Football League Division 3 final against Kildare on Sunday.